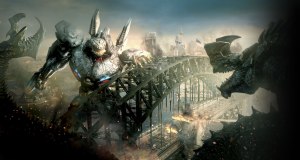 This is the promised follow-up to my recent post on the Hellboy movies; there is one more after this.

Complex images of emergent intersubjectivity such as those I identified in ‘On Hellboy’s Penis’ can also be found in Pacific Rim (del Toro 2012).

In 2013, creatures from another dimension open a portal in the gap between tectonic plates in the Pacific, and from this Breach giant monsters – kaiju – emerge. Humanity responds by building giant mecha – piloted robots known as Jaegers – with which to fight them.

Piloting a Jaeger requires a direct link between the human brain and the mecha body, but a single human mind cannot cope with the neural load. So pairs of ‘drift-compatible’ humans undergo a technologically-enabled mind-meld with each other in order to control the machine. This is initiated by a process known as a ‘neural handshake’, but obviously reaches far deeper than such a formal-sounding gesture implies.

Each pilot shares the memories of the other, their feelings and thoughts, without, it appears, exception. It is extremely intimate. It can be profoundly traumatic.

The process leaves us with a single consciousness, albeit one that is comprised of two parts, both of which seem to retain some level of distinction from the other even though they become as one. And it leaves us with two separate bodies over which each of them seems to retain individual control, and a third body, that of the Jaeger, which they jointly control.

While the compatibility of the pilots tends to rely on some kind of family or intimate relationship – brothers, father and son, lovers – sadly we are given no insight into how this works with the Wei Tang triplets (the pilots of the three-armed Jaeger Crimson Typhoon) played by the Luu brothers, themselves identical triplets. If identical twins represent an uncanny doubling of the selfsame (Shildrick 56), the further ‘excess’ of identical triplets surely extends this, undermining even further any sense of the security of selfhood by implying not just doubling but seriality.

Furthermore, when they pilot Crimson Typhoon, they become conjoined, concorporeal, even though they can in some ways be told apart.

The kaiju also trouble the notion of a singular identity. To begin with, each creature is so massive that it requires two brains: the main brain in the head and, located somewhere towards the other end of its spine, a secondary brain. The arse brain. This hierarchisation of

corporeal control echoes, perhaps unintentionally, that of the pilots of the Jaeger Gipsy Danger: Raleigh Beckett (Charlie Hunnam), the experienced white male brought out of retirement for one last mission; and the novice, Mako Mori (Rinko Kikuchi), a small Asian woman at whom – despite their mind-meld – Raleigh still feels the need to shout orders. (Though if there is an arsebrain among the Jaeger pilots, he is well in the running.)

When Dr Geiszler (Charlie Day) mind-melds with a fragment of a kaiju brain, he discovers some other things about them.

First, they have been here before. In a throwaway line, it is revealed that the dinosaurs were kaiju from this other dimension. But they could not survive in a terrestrial environment until the Anthropocene era rendered the world habitable for them. Of course, this is nonsense. Dinosaurs existed quite happily for about 165 million years and were the dominant vertebrates for 135 million of them; humans have only been around for about 200,000 years, about one 825th as long. But this absurdity at least suggests the extent of the ongoing devastation for which we humans are responsible, the mass extinction event and global climatological transformations over which we blithely preside.1

Second, although each kaiju is physically unique – each one looks like it is from a separate species – they all have identical DNA. So what appears to us as speciation is actually individuation within a single species.2

Third, they are all actually clones of each other. The film implies that they are a particular kind of soldier species created and deployed by some other, as yet unrevealed, monsters intent on colonising the Earth.

Fourth, despite all this variety or instability of form, the kaiju share a hive-mind, which implies that despite their many bodies they are effectively a single individual.

Sadly, Pacific Rim does not explore these potentially troubling seams of gold but, as one might expect of a film with a budget of $190 million, buries them in rubble. They are worth excavating, however, and transvaluating, turning into something positive.

For example, they speak to the politics of the contemporary moment which needs urgently to move beyond neoliberalism’s competitive individualism as the model of how humans are and how we interact, that treats ‘all creative agency and potential rationality as properties of individuals rather than of groups’ (Gilbert viii), that everywhere undermines democracy by treating collectives as irrational mobs or dupes under the sway of demagogues, that treats the social realm as a space of antagonism rather than an intersubjective field from which we all arise and through which we all mutually form each other.3

The habitation of monsters is utopia.

Those who tell us how horrible utopia would be, and all that we would have to give up, ignore that the majority world lack so much that utopia, even if it is a place of monsters, is better than what we have.4

And if we do indeed turn to such monsters as these – human, alien, animal, machine – as figures of utopia, we again find that Derrida has done some of the groundwork for us.

In the same interview I quoted in ‘On Hellboy’s Penis’, he says;

the future is necessarily monstrous: the figure of the future, that is, that which can only be surprising, that for which are not prepared … is heralded by species of monsters. A future that would not be monstrous would not be a future; it would already be a predictable, calculable, and programmable tomorrow. All experience open to the future is prepared or prepares itself to welcome the monstrous arrivant, … to accord hospitality to that which is absolutely foreign or strange. (386-7)5

With this in mind, I will conclude with a monster not of del Toro’s making.

In H.G. Wells’s The Island of Doctor Moreau (1896), the deranged vivisectionist is on one occasion diverted from his attempts to surgically uplift beasts to human status, to move them from zöe to bios, by trying to create life itself, a pure beast – what appears to be the quintessence of zöe:

[a] writhing Footless Thing … a limbless thing, with a horrible face, that writhed along the ground… immensely strong, and in infuriating pain. (77)

This creature suggests that the monstrous other is always also the utopian trace, the barely glimpsed signifier of a radically alternative space and time struggling to emerge into the text.

It is a place where such a creature could be at home, and so could we.

Notes
1 The original context for which this paper was written was a symposium on disability and sf, a context not present in these blog extracts. However, I did argue at this point that this history of the kaiju offers us a way to think about the Jaegers. They function as prosthetic ‘cures’ for the ways in which the kaiju presence relativises human ‘ability’ by abruptly rendering our world rather less habitable. This indicates the extent to which ‘ability’ and ‘disability’ can be understood as being constructed by the environments – here primarily physical, but also clearly social, cultural, political, economic – in which we attempt to live. Rather than let this note get any longer, I will post a final few comments on del Toro and disability in a couple of days.
2 This could be read as implying that each kaiju represents a stage within a life cycle which includes multiple, radical morphological changes, and that we are seeing a single species at different stages of its development. Though the film does not seem to mean this.
3 One might point to political philosophies building on the work of Alfred North Whitehead, Deleuze and Guattari, such as the vital materialism of Jane Bennett (see Vibrant Matter: A Political Ecology of Things (2010)) or William Connolly (A World of Becoming (2011)).
4 Or perhaps the habitation of monsters is merely the threshold of utopia, something through which we must pass in order to achieve full-on communism. Not merely the full-communism for which so many of my friends on the left call, often ironically, but a communism that is full-on: radically decentred and radically democratic, as green as it is red, as queer as it is feminist, as beyond racism as it is beyond ableism; just and libidinal and joyous.
5 Observing how culture tends to work, he notes that it will also be domesticated, but at least sees that as a negotiated process, in which it learns our habits and we learn new habits.

This and its associated posts are extracted from a paper, ‘Disability, Monsters, Utopia: Some Lessons from Guillermo del Toro’, delivered at Disability Studies/Science Fiction, Universität zu Köln, 28–29 November 2014. Thanks to Olga Tarapata and Hanjo Berressem for the invitation to participate, to Ria Cheyne and Margrit Shildrick for their supportive comments, and to the captive audience of grad students for asking so many questions.

Some version of it might appear in a book on monsters I am thinking about writing (cos, you know, they love to fund research leave for stuff like that).

2 thoughts on “On the Back of Hellboy’s Penis: Pacific Rim”