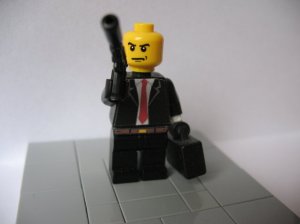 Back when he started, it was the travel he looked forward to most. He would set himself in motion and inertia would take him there. It had pleased him, too, that most of the journey would consist of another kind of inertia. Just sitting there. That odd combination of momentum and stasis.

He read a lot.

He inspected the toilet bowl and rim minutely, wiped them down with a wad of toilet paper, which he then flushed away. While the cistern refilled, he refolded the end of the roll so that the room would, when he left, show no trace of him having been there.

His bowels gurgled, and he flushed once more.

Nowadays, the travel was the worst part. Jet-setting in economy, trying to remain unnoticed, he could cope with. But at some point, the combination of ageing, airline food and the stress of a contract started to leave him constipated. Sometimes for days.

In the bedroom, the parts of a sniper’s rifle awaited his expert hands.

In Rome, it was merely inconvenient, but by the Manila trip it had started interfering with the job. He took to arriving days earlier than necessary, even though that increased his exposure, but to no avail. The bloating and discomfort would continue until long after he was back home. A doctor diagnosed IBS. His only consolation was that it was IBS-A, which alternated between diarrhoea and constipation. IBS-D, and that would have been the ignominious end of a lucrative career.

Maybe it was time to retire, anyway, he thought, as he finished assembling the rifle.

His bowels shifted and groaned. He farted noisily. The carbon pills he’d popped did little to staunch the stench. He thought, with a self-conscious smile, Now that’s what I call trace evidence.

He flipped open the tripod, mounted the rifle and checked the sights. It was a tight angle and he would have just a couple of seconds in which to take the shot. He breathed deeply to maintain his calm, a finger resting lightly on the trigger.

He glanced at the watch on the inside of his wrist. He still had at least five minutes. It was time enough. He returned to the bathroom.

This should not be happening to me. He considered himself, not inaccurately, one of the best in the business, and he was, more or less, at the peak of his game.

He strained, even though the doctor had told him not to. Something seemed to give. There was a plopping sound – he strained some more – and another.

It was odd, he thought, not for the first time. He was like, say, an illuminator of medieval manuscripts or, better yet, the apprentice of a great artist. His work was renowned, and yet he was anonymous. Well-known, but completely unknown.

He leaned forward and looked down behind him. Two tiny pieces of dark shit sat on the bottom of the bowl.

They are, he thought as he wiped his ass, like shards chipped away by a master sculptor, seeking the form hidden within the mass.

Once he was dressed, he repeated the ritual eradication of any evidence of his presence in the bathroom.

God alone knows what he is sculpting in there.

He glanced at his watch, and strode purposefully to where the rifle stood ready. He checked his breathing, and waited.

A replica in miniature – but not too miniature, it feels – of the doors of the Florence Baptistry?

He pulled the trigger, took the shot.

Maybe something equine, in the style of del Verrocchio or even Leonardo?

A double tap to be certain.

A David, perhaps, after Donatello or – dare I wish? – Michelangelo?

He picked up the spent cartridges, speedily disassembled the gun and packed away its parts. In less than a minute he was by the door, ready to leave. No sound of anyone outside. He reached for the handle, and as he did so, his bowels flip-flopped once more. The fart was loud, sustained and really really smelly.

Yeah, he thought, as he stepped into the corridor, swept up once more by the inertia that would see him safely home. Whatever is going on in there is a real copro-naissance.

[Author’s note: Okay, I admit it, ‘Shit, Joke’ would have been a better title.]