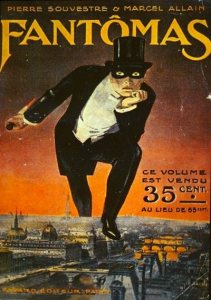 A giant figure in immaculate evening dress looms over night-time Paris. Stepping over familiar landmarks, he gazes out at us from behind a domino mask. And in his outstretched hand is a bloodied dagger. The image, by Gino Starace, is iconic. It is Fantômas. The Lord of Terror. The Genius of Evil. But despite his costume, he is not a gentleman.

Created in 1911 by Marcel Allain and Pierre Souvestre for a series of 32 monthly novels, the enormously popular Fantômas soon crossed over to the movies. In 1913 and 1914, Louis Feuillade directed five films about the endless quest of Inspector Juve and journalist Jerôme Fandor to capture the criminal mastermind. However, although Starace’s picture was used to promote Feuillade’s Fantômas, he only once appears costumed like this – and then as a figment of the defeated Juve’s imagination.

The head of a vast criminal organisation and a master of disguise, Fantômas has less in common with the gentleman thief than with the villains of Fritz Lang’s Die Spinnen (1919-20), Spione (1928) and Dr Mabuse films (1922, 1933, 1960), in whom the terrors of disempowerment and anonymity that accompany capitalist-industrial, urban modernity coalesce. Brutally instrumentalist and utterly impersonal, there is no true identity to be discovered behind his series of disguises.

Starace’s dapper but knife-wielding gentleman is – in the face of the globalising forces of empire and capital squaring off on the eve of World War I – at once reassuring, anachronistic, transgressive and fantastical. Perhaps this is why Fantômas, the product of arch-conservatives, so appealed to such radical avant-gardists as Guillaume Apollinaire, Antonin Artaud, Blaise Cendrars, René Magritte and Kurt Weill. He embodies the contradictions of his age.

The probable source of Starace’s gentleman-thief image is AJ Raffles, perhaps channelled through Maurice Leblanc’s Arsène Lupin. Created by EW Hornung in the 1890s, Raffles is the finest slow bowler of his generation. Penniless, he is nonetheless proud to be a Gentleman rather than a Player, and likewise insists on his amateur status as a thief. Selecting only the most challenging jobs and most exquisite loot to support his bachelor lifestyle, he robs from the rich and is not averse to others helping the poor. 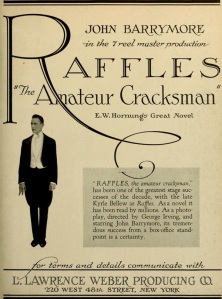 He appeared in a dozen films between 1905 and 1939. Raffles, the Amateur Cracksman (1917) stars John Barrymore in a breakneck mash-up of Hornung’s stories that only ever pauses to display The Great Profile’s great profile. This Raffles appears to be not so much a gentleman as someone who knows a gentleman’s tailor (Barrymore, his looks and his star both fading, is a more compelling gentleman thief in Arsène Lupin and Grand Hotel, both 1932). In Raffles (1925), House Peters, known as ‘The Star of a Thousand Emotions’, can muster only a handful of them, including ‘stolid refusal to be charismatic’ and ‘discomfort in ill-fitting evening dress’. In contrast, 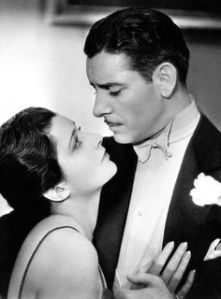 Ronald Colman in the first talkie Raffles (1930) gives one of his most effortless-seeming performances – as if acting were too vulgar even to contemplate – and the warm timbre of his Surrey burr modulates plummy received pronunciation into something quite sensuous. But the narrative material had already been filleted of its fundamental queerness. Hornung’s stories, focused on the close bond between Raffles and his accomplice Bunny, are full of innuendo and double entendre, with occasional allusions to amyl nitrate and Oscar Wilde.

Once the Production Code was enforced, the gentleman thief became not merely straight but almost completely desexualised. In the 1940 Raffles, David Niven is too young, his Raffles too boyish, and the casting of classical Hollywood’s very best good girl, Olivia de Havilland, as his love interest compounds an error that would not be corrected until Yorkshire Television’s 1977 Raffles series, 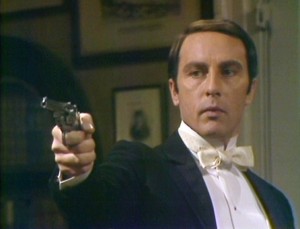 starring Anthony Valentine. Perfectly cast, Valentine’s precise delivery and slightly faded looks – the contrast between his crow’s feet and seemingly plasticised cheekbones suggests more than merely a youth misspent – unleash the homoerotic appeal of the gentleman thief: the tastefully furnished, comfortable quarters, devoid of women; the endless flirtations, but avoidance of romance or entanglement; the gentlemen’s clubs; the secret nocturnal identity; the dressing-up to break into other men’s houses; the crossing of class barriers; the mixing with rough trade…

But, queer or otherwise, this sexual undercurrent is not the only source of the gentleman thief’s appeal. The flipside of Fantômas, that anonymously devastating force of modernity, the gentleman thief negotiates modernity’s transformations of economic and social structures. This is beautifully captured by the prominence afforded a bust of WG Grace in the apartment of Valentine’s Raffles. As the finest cricketer of his generation, Grace is worthy of Raffles’s respect. But despite being a Gentleman, he was only nominally an amateur, making more money from the sport than any professional Player. A similar whiff of disrepute surrounds Raffles.

As old hierarchies crumbled, signifiers of social class were disrupted by wider access to certain varieties of commodity. Appearances begin to deceive. In Ernst Lubitsch’s racy, pre-Code Trouble in Paradise (1932), a Baron (Herbert Marshall) and a Countess (Miriam Hopkins) only fall in love when each discovers the other is a fake and a thief. Self-made and simulacral, they can play any social role – given the right costume – but the only place they really belong is with each other, conning, stealing or on the lam. However, such semiotic manipulations rarely succeed. In Pépé le moko (1938), Jean Gabin’s proletarian thief is unutterably stylish, but he cannot escape his class or fate.

In the post-war period, values shifted. Consider the contrast in The Pink Panther (1963) between the aristocratic Phantom and his nephew: David Niven is too old, Robert Wagner too American, too glib. A new consumerist masculinity was taking over, and gentleman thieves were no longer gentlemen. And they were as likely to solve crimes as commit them.

The character-type saw a popular resurgence in 1966, the year in which Cary Grant, Hollywood’s master of sartorial transformation (and a gentleman thief in To Catch a Thief, 1955), retired from films. The charm of Gambit’s Harry Dean (Michael Caine) is located in the gulf between his East London vowels and his dubious received pronunciation when posing as Sir Harold Dean. That of Kaleidoscope’s Barney Lincoln (Warren Beatty) depends entirely on his transparent reliance on a broad smile to buy time when he is out of his social depth. This league of ‘gentlemen’, which also includes Oliver Reed in The Jokers (1967) and Stanley Baker in Perfect Friday (1970), consists of working- (or middle-) class boys made good, and valorised for doing so. The very best of them is to be found in How to Steal a Million (1966), less a film than an opportunity to ponder whether Audrey Hepburn – as elegant when disguised as a cleaning lady as when dressed by Givenchy – or a young Peter O’Toole is the more beautiful (although it is probably a draw, O’Toole does showcase some of the most remarkable cigarette-handling you will ever see).

Costume, commodities and consumption are also at the heart of Mario Bava’s Diabolik (1968). The eponymous Jaguar-driving criminal mastermind (played by John Phillip Law, who looks like the offspring of Alain Delon and a Vulcan mod) dresses in full-enclosure leather and rubber body suits to commit his crimes, only his eyes visible through a domino-shaped cutaway. Based on a 1960s Italian comic book character, Diabolik is an intriguing inversion of Fantômas. His ‘terrorism’ is restricted to destroying the taxation system because the government have wasted so much public money pursuing him, and his subterranean base is a fantasy of modish, high-tech apartment living – a love-nest shared with Eva (Marisa Mell), his beautiful blonde accomplice with a taste for mini-

dresses, hotpants, hipsters, peekaboo tops and kinky boots. Crime, for them, is passionate foreplay and, in contrast to poor Raffles and Bunny, it need never go unconsummated.

This dynamic between class and consumption was repeatedly played out on British television in the late 1960s and early 1970s. Adam Adamant (Gerald Harper), a Victorian secret agent revived in swinging London, was a gentleman (and misogynistic prig) but not a thief. Peter Wyngarde’s deliciously-voiced Jason King was no 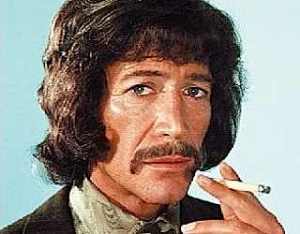 gentleman, although he was certainly a player. Tony Curtis’s brash self-made millionaire Danny Wilde partners up with Roger Moore’s Lord Brett Sinclair to fight crime in expensive locations in The Persuaders!, although Moore always seemed less an aristocrat than a bemused estate agent. However, the pattern was most decisively set when, in the fifth season of The Avengers, Patrick Macnee’s John Steed, formerly so well-dressed that you forgot he was a government functionary, let himself be costumed by Pierre Cardin. Bringing modern touches to classic Savile Row designs might have sounded innocuous, but from there it was only a short step to working with Gareth Hunt…

Perhaps it was the backlash against the ‘excesses’ of the 1960s and 1970s, or perhaps it was neo-liberalism’s success in persuading otherwise sensible people that there are no such things as society or social and economic classes, that finally did for the gentleman thief. Where is he now?

In Entrapment (1999), Sean Connery – whose James Bond negotiated so intriguingly between working-class physique and access to style, articulating social mobility as a semiotic possibility – is just some rich guy, no more convincing as a gentleman than he was as a Soviet submarine commander. There is too much of the catalogue model about Pierce Brosnan in The Thomas Crown Affair (1999), and George Clooney’s Danny Ocean merely gentrifies the rat pack. Remorselessly heterosexualised, they reek of new money. And then there is The Gentleman Thief (2001), which only exists because the BBC realised – far too late – that they should lazily cast Nigel Havers as Raffles before it was too late. Or former Eastender Michelle Ryan as Doctor Who’s ‘aristocratic’ thief/Emma-Peel-wannabe, Lady Christina de Souza…

[A version of this piece first appeared in Electric Sheep back when it was hard copy; but issue 12 (winter 2009), is now out of print.]