Back in the mists of time, around a decade ago, there was a plan for an ever-expanding online collection of short critical essays on key works of the fantastic. The plan fizzled and died, but not before I wrote nine pieces for it (which I just found on an old floppy disc – remember them?). This is one of them. 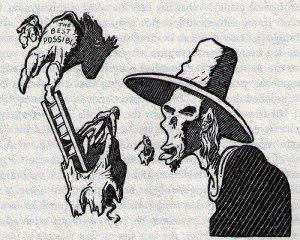 The innocent Candide is exiled from the Westphalian castle where he was raised when he and the Baron’s daughter, Cunégonde, fall in love. A series of comic, grotesque, satiric and implausible adventures ensue as Candide and various companions trek throughout Western Europe and South America before finally settling, older, battered by experience and possibly wiser, in Turkey.

Candide contains no fantastic elements beyond its use of outrageous coincidence, which might be more properly judged comical than fantastical. Its most obviously science-fictional component is the briefly sketched satirical utopia of Eldorado

‘What! You mean you don’t have any monks to teach and dispute and govern and intrigue and burn people to death who don’t agree with them?’ (49)

which Candide and Cacambo decide to leave because everyone there is wealthy:

‘If we stay on here, we’ll simply be the same as everyone else, whereas if we return to Europe with even a mere dozen sheep loaded up with Eldorado pebbles, then we’ll be richer than all the kings put together’ (51).

However, in terms of the Natural Philosophy of its period of composition, Candide is a profoundly science-fictional novel.

The ‘optimism’ of its sub-title refers to Leibniz’s Principle of Sufficient Reason, an attempt to apply reason to the problem of theodicy, the branch of theology concerned with defending the Christian god against doubts and attacks derived from the existence of physical suffering, misery and evil. Leibniz’s Principle argued that there is always a logical reason for the way things are. Therefore, as god is perfect, then his actions must also always be perfect. In creating the universe, he created something separate from himself which, by the very definition of being separate from god, must be less than perfect. At the moment of creation, he chose between all possible worlds, and from among them he chose the best of all possible worlds – that which, over the course of its entire history, would produce the greatest ratio of good over evil. Therefore, all the evil and misery and suffering that we experience serves a greater good, although perhaps not on a scale we can perceive. Candide’s journeying and education expose him and his companions to monstrous suffering and degradation, prompting him to question the Leibnizian argument espoused by the supposed philosopher Pangloss.

While darkly hilarious, Voltaire’s relentless assault on the Principle of Sufficient Reason might seem too much of its time to possess contemporary relevance. This is not the case. Chaos theory or non-linear dynamics show that, despite living in a determinist universe, the cause-and-effect chains we construct to explain the world are partial narrativisations which do not take account of the state of the total system as it changes from moment to moment. Nevertheless, we continue to rely on such narrativisations and to frequently misunderstand retrospectively-constructed cause-and-effect chains as inevitable processes and history as purposive. It is good then to be reminded of the spurious reasoning thus produced:

‘It is demonstrably true,’ [Pangloss] would say, ‘that things cannot be other than as they are. For, everything having been made for a purpose, everything is necessarily for the best purpose. Observe how noses were made to bear spectacles, and so we have spectacles. Legs are evidently devised to be clad in breeches, and breeches we have. Stones were formed in such a way that they can be hewn and made into castles, and so His Lordship has a very beautiful castle. The greatest baron in the province must be the best lodged. And since pigs were made to be eaten, we eat pork all the year round. Consequently, those who have argued that all is well have been talking nonsense. They should have said that all is for the best.’ (2)

The introduction of and justification for a hierarchical power relationships in Pangloss’s ludicrous argument also demonstrates an early awareness of the instrumentalist misuses to which power bends reason into ideology, normalising existing structures of domination.

The other way into the science-fictionality of Candide is through tracing its possible influence on the genre: the Eldorado episode seems to provide a model for HG Wells’s ‘The Country of the Blind’ (1904); the satire on reason became central to US magazine sf in the 1950s. Neal Stephenson’s monumental Baroque Cycle (Quicksilver (2003), The Confusion (2004), The System of the World (2004)) revisits the origins of science-out-of-alchemy and explores the changes wrought on human understanding by the development of reason and empirical observation. In doing so, in reimagining the Europe of, among others, Leibniz, from a perspective derived from information science, Stephenson revisits the origins of sf in the dialectic of materialist and idealist world-views. By depicting capital as an information technology, Stephenson uncovers the central rôle of fantasy – commodity fetishism – in the modern period. The global trekking of The Confusion resembles Candide (although at considerably greater length – Stephenson has not inherited Voltaire’s concision), while the trilogy as a whole concludes on a distinctly Candide-like note:

At some point the whole System will fail, because the flaws that have been wrought into it … But … he has to admit that having some kind of a System, even a flawed and doomed one, is better than to live forever in the poisonous storm-tide of quicksilver that gave birth to all of this.
He has done his job.
‘I’m going home now,’ he says. (System 886)

Perhaps what is most remarkable about Candide is how very modern it seems. From Pangloss

giving a lesson in applied physiology to [a] maid, a very pretty and very receptive little brunette (3)

to its deadpan descriptions of rape, murder, torture, mutilation and slaughter, its ironic distantiation self-deconstructs reason’s fundamental idealism (its belief in its ability to abstract itself from the material world).

And in this time of religious fundamentalism (Christian and otherwise) and militarism, Candide’s anticlericalism, its clear perception of the sheer brutality of warfare and of the instrumentalisation of reason are to be admired, imitated and pursued.

One thought on “Voltaire’s Candide, or Optimism”