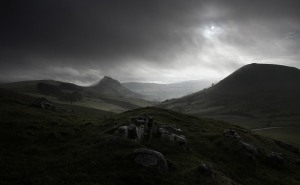 It is some time since I have had the opportunity to write. There has been so much to do, and the days have blurred into one another. My mind has been pre-occupied not only with that strange subterranean drumming – an incessant thrum that now seems to accompany me everywhere – and that monstrous visage, but also with the task which Charteris has set me. In order to pursue it, I have set aside, albeit temporarily and with much anguish, my translation of the codex.

You see, around the walls of that chamber are arranged twelve tablets, spaced equidistantly. The writing carved in each of them is in a language predating the text recorded in the codex, but clearly (I think) an ancestor to it. If MacReady and Dyson are correct, it dates from before the well-known proto-Elamite script and the controversial Dispilio Tablet, and even before the Vinča and Jiahu symbols that only a canting professional courtesy dares call ‘writing systems’.

My unease disappeared as I pored over the antediluvian writing, clumsily attempting to transcribe it while holding a torch. ‘We already have complete 3-D scans of them,’ Charteris said. I put  my pen and pad away and just spend time taking in this wondrous find.

Each day I return to the chamber for a while to read the actual characters, but most of my time is now spent with a print-out of the scans, familiarising myself with this most ancient of tongues, beginning the laborious process of comparison, hypothesis and deduction, all of it tentative, most of it destined to being discarded. Charteris, not seeming to grasp that this is a life’s work, urges me on to premature and incautious attempts at rendering the script in English.

For all that my days now possess a common pattern, I continue to be disturbed and agitated. The scratching within the walls now follows me throughout the house. The squirrel continues to feed whatever it is in her nest. That dark shape lurks on in the orchard, and at the edge of my vision that white creature flits away before I can take it in. I realise I do not know the difference between stoats and ferrets and weasels and mink – could it be one of them? According to local miners’ superstition, a white hare is an ill-omened creature, presaging catastrophe. They say something similar about seeing a large black dog. I try not to think about it.

The rain is incessant now. It hangs in the air like a shroud.

Each morning as I focus on the ancient text, I become lost in concentration. MacReady and Dyson have both essayed repetitions of Charteris’s prank. On consecutive days, one or other of them stood over over me with a concerned expression on his face as if he had just woken me from an unearthly possession and dire incantations. Charteris brushed them away, making it clear I will not be chaffed in this way, but he too looks at me oddly.

This morning they are unable to continue such foolishness. When they come down from their beds, they find me pacing the kitchen floor in deep distress.

I had arisen early, as is my wont, and thrown back the curtains in my room. The squirrel was squatting there, just outside my window, as if waiting for me. I swear she looked directly at me, her rheumy eyes glaring coldly, as she raised her paws to her mouth and began to eat. Whatever she held was still alive, wiggling, screeching in pain as she gnawed at it. Once it ceased to move, she discarded it, and darted back to her nest. Just as I began to make out the form of her prey, she returned and repeated the performance. She did this six times. I watched in horror as she killed, partially consumed her young and scattered their corpses indifferently around her.

Sweetened tea was unable to quell the sickness mounting within me.

As I told the others about it, MacReady put on his coat and boots and set out to the farm for the day’s supplies. Within moments he returned, more pallid and shaken I suspect than even I had been this morning. ‘You have to come and see this. All of you.’

Outside, surrounding the cottage in a nearly perfect circle there is a ring of dead animals and birds, torn out of shape, ragged and distended, shattered; many are beyond even the most rudimentary of identifications.

We do not even try to formulate explanations.

We are stranded on an island in a blood-thirsty sea, our high-water mark limning the outline of some indiscriminate biological pogrom. The air reeks of a desperate foreshadowing.

One thought on “My Holiday in the Peak District, day seven”