The months since my last update have been crazily busy with other things, so there has been little time for research and even less time for actually reading any of the goodies I’ve uncovered. Most of which are annoyingly inconvenient sizes and shapes to lug around with me over my Xmas perambulations. But I thought I would post another list before Xmas (and before that teetering pile of books in the corner falls over on top of me).

First up, I should mention the hugely embarrassing omission of Amos Tutuola from the article that started all this (and my indebtedness to Paul March-Russell for drawing it to my attention   in such a generous way). Truth is, I have never read anything by him, though The Palm-Wine Drinkard (1952), My Life in the Bush of Ghosts (1954) and Feather Woman of the Jungle (1962) may well 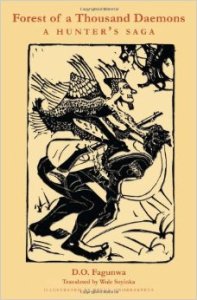 be squeezed into the suitcase. As might D.O. Fagunwa’s Forest of a Thousand Daemons: A Hunter’s Saga (1939), translated by Wole Soyinka(!) – the first Yoruba-language novel, said to be an influence on Tutuola, not least in its fantastical landscape in which the supernatural is as real and present as the natural world.

While we’re in the margins of what might be considered sf, I have had a load of things recommended to me that might be more appropriately labelled ‘weird’ or ‘slipstream’:

The more obviously genre works that have come my way include:

(Should also mention Tade Thompson’s debut novel, Making Wolf (2015), although it is a crime thriller, not sf/f.)

One of the things I am interested in starting to trace is the role of speculation and futurity in African political discourse, which has recently led me to:

Taking of awkwardly shaped and sized books, as I was some time back, one final goody I stumbled across, which provides some useful context for thinking about African sf/f is Readings in African Popular Literature (2002), edited by Stephanie Newell. It reprints some critical articles, but also some fiction and comics and various pages from Drum magazine.