We began with some context, outlining the scale and nature of house-building and redevelopment in the UK in the postwar years, drawing largely on John Grindrod’s Concretopia: A Journey Around the Rebuilding of Postwar Britain (2013) and Lynsley Hansley’s Estates: An Intimate History (2008).

There was already a housing shortage in the UK between World Wars. The promise to ensure that soldiers returned from  WWI to a land fit for heroes (and thus stave off socialism) was never met – construction rates were too low and often the wrong kind of housing was being built in pursuit of the rather different goal of making private profit (Paul Rotha’s documentary Land of Promise (1946) is the classic film account of this issue and its history). During the war years of 1939-45 the UK population grew by one million per year – and during the same period four million homes were destroyed or damaged beyond repair by bombing (completely undoing the interwar construction efforts and significantly reducing housing stock in relation to total population).

Aneurin Bevan, the minister responsible for housing in the post-WWII Labour government, set a target of 300,000 new council houses per year – but rarely managed more than 200,000 – because the houses were to be spacious (90 square metres), brick-built with gardens. For him, such decent houses were not to be restricted to the privately-owning middle classes – they should be available to the working class, rented at lower than market rates from local councils. (One policy proposal considered but sadly never pursued was buying out all private landlords, thus monopolising the rental market and keeping down the cost of housing.)

When a succession of Conservative governments took office (from late 1951-64), they took up the challenge of 300,000 new houses per year – and succeeded in meeting the target. But they did so by reducing the size of the houses (70 square metres) and shifting from brick construction to speedier (but less durable) prefabricated structures, with no guarantee of gardens. And there was a shift to building blocks of flats rather than houses because they were cheaper and quicker to throw up from prefabricated materials. Ironically, because these blocks were typically set in parkland of some sort, the same number of people could have been housed in the same space with terraced housing.

In High-Rise, Ballard is fully aware of the economics determining such constructions:

All the evidence accumulated over several decades cast a critical light on the high-rise as a viable social structure, but cost-effectiveness in the area of public housing and high profitability in the private sector kept pushing these vertical townships into the sky against the real needs of their occupants. (52)

Why were the blocks typically surrounded by parkland? Partly, it seems to be the influence of Le Corbusier, whose unrealised ville contemporaine (1922) plan to build 24 60-storey cruciform high-rise skyscrapers in which three million people would live and work did so. Ballard does not pursue the scale of this scheme – Robert Silverberg’s The World Inside (1971) comes closer – but he does draw on Le Corbusier in other ways.

1 Lift the structure off the ground on reinforced concrete stilts (pilotis), enabling
2 a free façade (non-supporting exterior walls to allow the architecture freedom in his design) and
3 an open floor plan (interior could be configured without having to worry about supporting walls).
4 The free façade enables ribbon windows so as to provide clear views of surrounding gardens.
5 A roof garden compensates for the ground area covered by the building.

These principles are evident in his Unité d’Habitation in Marseilles, often described as resembling a moored ocean liner, contains 337 apartments, with a floor halfway up the block devoted to public amenities, and a roof garden. It is also raised up on pilotis. It became a location of pilgrimage and an object to copy for a generation or two of architects, including many of those planning housing developments for British councils. It also provides the design for Ballard’s own high-rise (it even stands on pilotis, ‘concrete legs’ (19)), one of five spaced equidistantly on the eastern edge of an under-construction square mile development in London’s docklands (in this, the novel is proleptic of material we studied way back in week one of the module, The Long Good Friday and London’s Overthrow – as well as of what has actually happened to such spaces since Ballard wrote the novel).

The other context I introduced was about Ballard himself: his centrality to New Wave sf of the 1960s and 1970s; his early novels refiguring the conventions of disaster fiction, such The Drowned World (1962), which also introduce surrealistic images into narratives indebted to writer like Joseph Conrad and Graham Greene; the thematic trilogy, including Crash (1973) and Concrete Island (1974), which concludes with High-Rise; the autobiographical fictions and the more mainstream respectability that came with Empire of the Sun (1984); and the return of his late novels, Cocaine Nights (1996), Super-Cannes (2000), Millennium People (2003) and Kingdom Come (2006), to transformations in bourgeois living environments.

Turning to the novel, we began by thinking about the names and characteristics of the three narrators, each of whom is associated with one of the three classes that emerge among the middle class residents of the building.

From the lower levels, Richard Wilder – physical, aspirational – he is the wildest and most overtly violent of the three and a frequent adulterer whose wife calls him Dick.

From the mid-levels, Robert Laing, whose name echoes that of the unorthodox psychiatrist RD Laing (1927-89), who saw mental illness as a product of social environments rather than as some kind of inward-driven deformation of the self, and who considered patients’ descriptions of their responses to their environments as valid in themselves rather than as symptoms of Freudian disorder. Opposed to use of antipsychotics to treat mental illness, he favoured recreational drug use and believed that mental illness could be a kind of transformative, shamanic experience. He also promoted primal scream therapy – most of the inhabitants of Ballard’s building seem to go through some version of it – and rebirthing therapy – foreshadowed for Robert Laing when he is surrounded by the threatening guests at the cocktail party to which he is not invited, with the whole novel constituting a kind of rebirthing for him.

From the very top floor, the architect of the building, Anthony Royal – a royal, the king of the place. Recently injured in a car accident, he suffers from a disability – and wears a distinctive costume – that makes him come across, one of the class suggested, like a Bond villain. Which enabled me to go, ah, funny you should say that…

I have long wondered whether having the architect of the building live in the penthouse was inspired by the fact that Hungarian-born architect Ernő Goldfinger lived for two months in an apartment on the top floor of Poplar’s 26-storey Balfron Tower (built 1965-67), which he had designed. He and his wife are said to have thrown cocktail parties to meet the other residents and learn their thoughts about his design so that he could incorporate criticisms and suggestions in his later building, such as the neighbouring 11-storey Carradale House (built 1967-70). Back in the 1930s, Goldfinger had been responsible for the demolition of some cottages in Hampstead to make way for three new houses, in one of which he would live. Ian Fleming was among those protesting the demolition. Twenty years later, Fleming would name a James Bond novel – and villain – after the architect. Ernő Goldfinger threatened to sue over Auric Goldfinger, to which Fleming reputedly responded, Okay, I’ll just rename him Goldprick. Ernő decided not to pursue the case.

Next we took a look at the opening paragraph, detailing how the design of Ballard’s building displays the influence of Le Corbusier and, in particular, Unité d’Habitation, and then looking at how it introduces patterns of imagery that will recur throughout the novel.

We then looked at the next section of the opening chapter (7-11), in which we learned more about the structure of the building and the docklands development of which it is a part, and the feelings it induces as a tripartite class structure begins to emerge among its bourgeois inhabitants. Highlights include: 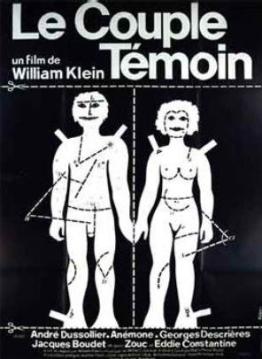 We closed with a brief discussion of Le couple témoin, William Klein’s film about an average couple who win a competition to live as test subjects in a new urban development – the experiment is ostensibly concerned with designing apartments to ensure that they meet the needs of such a couple, but it clearly is more concerned with engineering their consent and subservience. The psychosociologist experimenters – themselves hardly rational – subject Jean-Michel and Claudine to an array of absurd tests, frequently bullying and brow-beating them, passive-aggressively consulting at them, reinforcing the most conservative of gender roles. The tests become increasingly irrational and arbitrary – authority being exercised because it is authority, not for any greater end. As funding for the experiment withers, and viewing figures for the Big Brother-like media coverage slump, so a group of child and teen revolutionaries are hired to stage a hostage-taking…