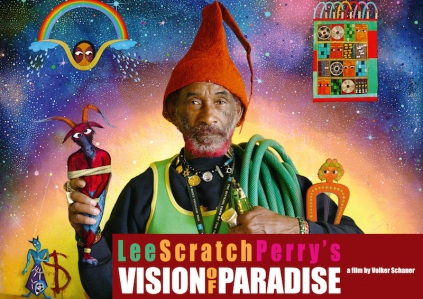 There is a moment in Lee Scratch Perry’s Vision of Paradise (2015), when Volker Schoner shows some poor journalist asking Perry what his typical day is like and then sitting there bemused as ihe mprovises a rambling reply, which ultimately comes down to something like ‘I wake up and see what’s on my to-do list’. But it doesn’t sound anywhere near as mundane as that. (The haplessness of the journalist reminded me of that time The Word sent some child to interview Henry Rollins, and she asked him what music he listens to. He describes playing the first four Black Sabbath albums back-to-back; the journo, who clearly does not know Black Sabbath other than as the name of some band to whose wax cylinders her grandpa used to listen, asks ‘what is that like?; Rollins replies, ‘Dunno, have you ever been killed?’) This is quite a cunning move by Schoner, a sneaky displacement of his own bemusement – but he is clearly also often baffled by his subject.

The film is rightly being touted as a portrait of Perry since it offers no real insight into him, but allows you to spend 100 minutes in his impish company, which is frequently delightful, always entertaining. He has the most fabulous laugh, and clearly is often just messing with the filmmakers, being mischievous, playing up and playing on his image and reputation. And there is also a seriousness to his Rasta politics, from which he never shies away; this is accentuated in the final twenty minutes of the film  when the occasional, playful animations become increasingly apocalyptic.

The film also offers little in the way of history. There is discussion of the Black Ark studio, now sadly in ruins, though that is largely Perry’s own doing, since  it was him who set fire to it. And there is an effort to get the scoop on Perry’s relationship with Bob Marley.

But mostly we see Perry in various situations and contexts just doing his thing: he doesn’t really do conversation so much as improvised discourse built around patterns of repetition and rhymes and variations (in this, he reminded me of Lord Kitchener and other calypso singers who predate reggae and dub).

We missed the film when it screened at the Cube, so took a train over to Cardiff to catch it at the Chapter Arts Centre (trip and tickets came to roughly the cost of seeing a film in Leicester Square – but with none of the regrets that come with paying that much to see 30 Days of Night (Slade 2007) or Battleship (Berg 2012)). We were joined by a dozen other white folks in a 48-seater, we were probably the youngest people there, and occasionally I found myself worrying people were laughing at rather than laughing with Perry. But if it was the former, that is largely a product of how the film stays outside its subject – he remains an elusive and impenetrable subject, but that is part of why he matters so much.