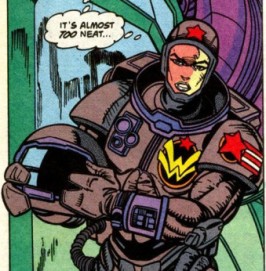 Eliane moved through the city with practiced ease, transforming her appearance by increments and occasional bold flourishes. She sidestepped prying eyes, and was so charming to anyone who paid too much attention that later, if questioned, they would succumb to an excess of discretion. She arrived at the New Dragon Gate with enough luggage to draw no attention, but not so much that she might be remembered.

Through this series of transformations, the only items she retained were the pack and the belt from which it hung.

She checked into the best room in the hotel, showered, slept for three hours, ordered a light meal and afterwards showered again. Sitting on the bed in just a towel, she split open the belt and withdrew a pair of keratinous filaments. Carefully, she straightened them, avoiding their razor sharp edges and vicious points. She searched through her most recent purchases. The emerald corset was exquisite, and she admired it briefly before unpicking the stitching to remove two of the skrill bones that shaped it. She replaced them with the whip-like keratin blades, ensuring their looped handles would be within easy reach, one on either side of her spine. No weapons sensor would pick them up.

Next, she would do something about her hair, and then summon a maid to help her dress.

Brett slipped into a light shirt.

‘Mirror’, he ordered the monitor, and tied his string tie in front of its silvered screen. As he buttoned his brocade waistcoat and attached an archaic fob-chain, Fare Thee Well tried again.

‘There’s been a lot of bandit activity round here the last couple of years,’ she said, switching the screen to a montage of news reports. Wrecked cruisers floated in inky blackness, their hulls ripped open and haloed by debris. Rapid zooms picked out floating corpses. Corporate spokespeople, flanked by high-ranking military, promised stronger security, swift retribution. Deployment of pursuit vessels to the sector. High alert status. ‘And it’s not just the corporates being hit. CoreMedia says even The Dread Fox thinks us independents are fair game, now. And whoever’s flying her is becoming a lot less particular. Used to go out of their way not to take lives.’

‘When did you start believing CM? Corporates do this every time they’re about to push further into the Riff. Wouldn’t surprise me if they were behind it all.’

‘There’s no smoke without fire.’

Brett brushed his long black frockcoat. Open-breasted, it had room for just two buttons before it swept down and away from his hips. It was an ancient design, intended to give clear access to a gun belt. Out on the Riff, folks often relied on images from the past to survive the future. It helped to keep things simple, to reduce complexities to well-worn stories everyone knows. Nothing could take you by surprise, certainly not a great big handsome man with an easy smile and an aversion to violence that some might mistake for cowardice. He rarely carried a gun, especially not to a card game. Which was just as well. Strangers had a tendency to mistake his sharping for cheating, but Riff-folks’ disapproval of killing unarmed people tended to channel outbursts at the poker table into less fatal expressions.

‘You know I have little compunction about mentioning our insurance situation,’ said Fare Thee Well.

‘For the last time,’ Brett said, ‘I’ve got it covered. At least, I will have in a coupla hours. Until then, it’s down to you.’

He settled a stetson on his head, tilted it forward slightly, dapper as could be. ‘You think you can handle it?’

Fare Thee Well grunted. Unless something really exotic turned up, she’d pit herself against most anyone. And although he knew she would never admit it, she’d back him against pretty much any stud of poker players, talent of gamblers or not-excessively-rigged house. He just wished they didn’t have to rely on it quite so often to make ends meet. A sentiment he knew she would share, if her Turing torcs permitted her such a thing as wishing.