In the late 1980s, the BBC began to spin off and divest parts of the organisation, laying the groundwork for establishing autonomous but wholly owned cash-cow subsidiaries. Central to this plan was the transformation of BBC Enterprises into BBC Worldwide. In order to monetise the BBC brand, production reoriented to programming that could be sold overseas. One outcome was the three-times-a-week upmarket soap El Dorado, set in a not-too-precisely futuristic gated community and exclusive resort town on the Mediterranean.

Based on Ballard’s Vermilion Sands (1971), it began by interweaving plots and characters from his collection of linked stories into an unfolding, soap-opera structure featuring more typical character types and narrative arcs that expanded beyond Ballard’s focus on cutting edge and/or imaginary artforms.

After some teething problems and initially poor ratings, the series attracted a dedicated and growing audience, especially when changes to the production team led to a significant change of direction. Influenced probably as much by Dark Shadows (1966-71) as by the more recent Twin Peaks (1990-91), El Dorado took a decidedly weird turn.

Key to this was the altered ending of the arc derived from Ballard’s ‘Venus Smiles’ (1957), which concluded with the destruction of the statue the town commissioned from Lorraine Drexel (Kate O’Mara). Three months later, this thread was picked up, as the scrap metal, now being used in construction, starts to vibrate at a peculiar resonance, driving Hamilton (Christopher Cazenove) to visionary madness.

When Jonathan Powell, a staunch supporter of the show, was dismissed as Controller of the BBC1, it was clear the writing was on the wall. Producer Corinne Hollingworth took the unusual step – suggested by Robert Holmes, whom she knew from her Doctor Who days – of mashing up the series with elements of Ballard’s High Rise (1975) so as to kill everyone off before Powell’s replacement, Alan Yentob, could.

El Dorado was not a massively successful contribution to BBC Worldwide’s export drive, but it did achieve a measure of notoriety when Toronto’s CIVIC-TV cable channel broadcast the series with newly filmed hardcore inserts.

This screening will feature: episode one, in which El Dorado’s louche patriarch/architect, played by Peter Wyngarde, dies under mysterious circumstances; episode seventy-eight, for which Cazenove received his BAFTA nomination; and the terrifying series finale, in which a crash-landed astronaut washes ashore in the deserted resort and uncovers the archaic horror lying beneath. 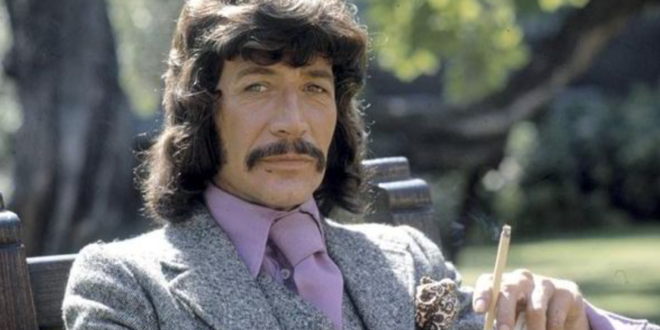