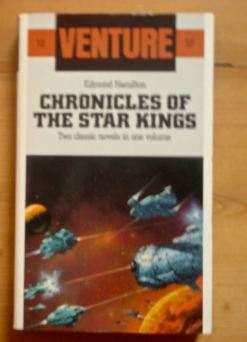 Those of you who followed the gripping tale of my comical endeavours  to pick up a cheap copy of the omnibus edition of Edmond Hamilton’s Star Kings novels will be delighted to hear that it was really not worth the effort.

In The Star Kings (1949), the protagonist, John, bored with life in contemporary New York is contacted telepathically from the future by ‘Zarth Arn, prince of the Mid-Galactic Empire’. Zarth wants to swap consciousnesses with John so he can study the Earth from 200,000 years in his past. Drowning in ennui, John agrees, and on waking in Zarth’s body finds himself propelled into the centre not only of a complex love triangle – with Zarth’s morganatic[1] wife, Murn, and Princess Lianna, who he must marry to strengthen an interstellar alliance – but also of a Galactic civil war fomented by the treacherous Shorr Kan.[2] Breakneck action – palace intrigues, space battles, perilous worlds – ensues in a peristaltic narrative made up of successive cliffhangers. But John wins the day, and the princess, before having to return to his own body and time.

In Return to the Stars, Zarth  has found a way to transport bodies through time and invites John to join him in the future. John, desperate to return to Lianna, agrees, though without really thinking it through: she will look exactly the same to him, but she will not recognise him at all. Romantic complications ensue, and another peristaltic story, as aliens from beyond the galaxy foment another civil war. John finds himself teaming up with his former and it-turns-out-not-at-all-dead nemesis Shorr Kan to save the galaxy once more. There are palace intrigues, space battles, perilous worlds, and even though the novel was written in the 1960s it once again feels like a comic strip from the 1930s. A point Hamilton, unable to keep a straight face any longer, eventually acknowledges.

You see, John’s surname is Gordon. And on page 89 of Return to the Stars, Hamilton writes:

In a flash, Gordon knew. 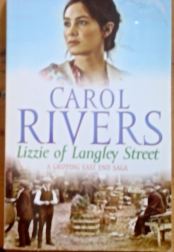 (Now I suppose I should read Carol Rivers’ gripping East End Saga, Lizzie of Langley Street for whatever small crumb of pleasure can derived from it before it goes to the charity shop.)

Notes
[1] Hamilton seems especially proud to have discovered this word, using it at every opportunity.
[2] Who is in no way a tiger.