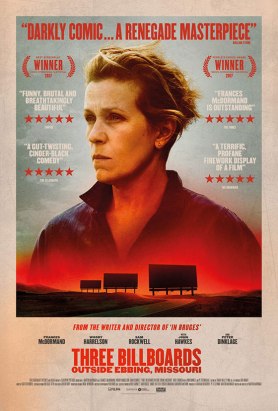 1. All those comparisons of McDonagh to Tarantino and the Coen brothers are as lazy as they are wrong.
Yes, all three/four directors combine violence, black comedy and relishable dialogue being relished, but they all make films that are tonally very distinct. Tarantino and the Coens are, in their different ways, entirely superficial. Which is not necessarily an insult – and especially not in the first half of the Coens’ filmography. However, Three Billboards is a story of sexual violence, in which a woman who is not supposed to have a voice finds a way to speak out, and everyone tells her to shut up. That we now need to keep hold of Three Billboards‘ relevance (however unintentional) to the #MeToo conjuncture, while also needing to hear the growing criticism of the film’s treatment of race, suggests something deeper than mere surface. (As does, more trivially, its relative absence of obvious intertextual allusions.)

Also, Tarantino and the Coen brothers write, albeit in different ways, one-dimensional characters. They might be dazzling and memorable – again, especially in the first half of the Coens’ filmography – but they are fixed and incapable of change. McDonagh’s characters might not be fully rounded, but they do at least possess multiple conflicting aspects. They are little bundles of wrongfooting dialectical energy – which is why the coughing-blood-in-the-face scene works so well – unless they are dentists or priests. Or black. Particularly not if they are black.

2. Complaints about narrative incoherence miss the point.
Awww, diddums. Baby want a bottle? McDonagh repeatedly sets up formulaic situations then refuses the easy pay-off. You’d probably have been delighted if there had been a police cover-up, or if Dixon (Sam Rockwell) had accidentally overheard the killer in the bar, or if he had shot himself, or his mum, or his mum and then himself. (I suspect this is why people keep misdescribing his story as one of redemption. They want it to be as tediously familiar as that.)

3. This is yet another American film about lynchings that cannot bring itself to be about lynchings.
Like Fritz Lang’s Fury (1936), Mervyn Le Roy’s They Won’t Forget (1937) and Norman Jewison’s In the Heat of the Night (1967), among others. Despite all the violent crimes committed in the film, the only person to go to jail is black. On a petty charge trumped up by a racist cop. A racist cop who recently got away with torturing a black suspect in custody, and continues to get away with violent assaults. And Mildred (Frances McDormand) gets away with all manner of shit in relation to the rape-murder-incineration – but not quite lynching – of her daughter. Try doing that while being black. Hell, try quietly refusing to stand for the national anthem.

Meanwhile the three black characters are just there to signify moral dignity (Clarke Peters channeling The Wire‘s Lester Freamon as the new police chief) or to accessorise Mildred and thus deflect from, while also complicating, her racist language. (I’d like to think that when Denise (Amanda Warren) and Jerome (Darrell Britt-Gibson) inevitably hook up, it’s because they’re the only people in town who aren’t assholes. But that is not the reason.)