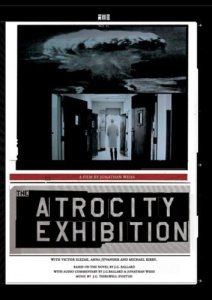 Assuming it is even possible, to what extent and in what ways should adapta­tions remain faithful to their sources? All manner of possibilities emerge when the adaptation is free of the constraints of respectability, accessibility and banal fidelity that a studio budget tends to entail, and when the source is supposedly ‘unfilmable’, as is the case with Weiss’s independently financed adaptation of JG Ballard’s novel.

Ballard’s and Ballardian prose is recited in voiceover and by carefully pos­itioned actors – affectless mannequins in static tableaux. The camera is locked or tracks slowly. Interspersed is footage of Hiroshima survivors, crash test dum­mies, nuclear tests, Kennedy’s assassination, plastic surgery, the Challenger dis­aster, the war in Vietnam, penetration, Marilyn Monroe. A voiceover posits that the film was shot by Dr Travis (Victor Slezak), misappropriating the institution’s equipment and funds, as therapy, but is uncertain for whom.

Often, however, this mixture of stock footage and re-enacted scenes feels more like a high-end BBC documentary profile of Ballard, with the talking heads and explicatory arc excised. Some shots are strikingly composed, particularly when situating humans among architecture, but they lack the clinical precision of Cronenberg’s adaptation of Ballard’s Crash (Canada/UK 1996) and never achieve the gor­geous insanities of Matthew Barney’s Cremaster cycle (1995–2002). The static set-ups and slow tracks suggest Tarkovksy, but lack his attention to rhythm, to sculpting in time. While the film is never as torpid as, say, a classical Hollywood adaptation of Hemingway, its languor is strangely at odds both with Ballard’s surrealist prose montage and the media landscape he dissected. Imagine what Godard or Tsukamoto could have done with such material.

Several times Weiss tilts his camera upwards from the ground at his feet to an object further away, opening up a wider perspective. This tension between the detail and the whole pins Weiss and his film in the angle between two depths of field. Take for example the long shot of Karen Novotny (Anna Juvander), being fucked from behind while leaning out of a car window, naked apart from a picture of Ronald Reagan strapped over her face. The camera tracks in slow­ly, the music on the soundtrack adding a sense of respectfulness rather than juxtaposition. Before we can make out the image over her appropriately bored face, we know it will be of Reagan. All the elements are there, but somehow together they become less than their sum. The sequence only comes alive when old movie footage of Reagan, apparently looking askance at these shenanigans, is briefly inserted. This captures something of Ballard’s impish absurdism but nothing that might shock, however fleetingly, the bourgeoisie.

The Atrocity Exhibition is not so much an adaptation as an ambiguous memoriali­sation, turning Ballard into a suburb of European art cinema.