Waking up in post-apocalyptic Britain last Friday, and with only a week to go until Mad Max: Fury Road, it was time to get back up to speed. Thus did the Mad Maxathon commence!

Back in my Plymouth teens, one of the local free papers had a competition to win cinema tickets and related goodies. Most weeks I entered and – not having enough pocket money or, later, paper-round wages to waste on a postage stamp – would deliver it in person (in a reused envelope) to their offices. The only things I ever won were a pair of tickets for a double bill of Ghoulies and Trancers (I suspect no one else entered that competition) and, a year later, a pair of tickets for Mad Max Beyond Thunderdome, a film my girlfriend did not want to see, especially after the preceding year’s fiasco. Oh, and along with the tickets came a Thunderdome t-shirt, which I had to collect in person and, being poor, could not just throw away despite the embarrassment of advertising a film I hated. It became a winter garment, always worn under something else, until eventually it faded and fell apart. This may well be the origin of my dislike for clothing with writing on it. And of white t-shirts.

I forget when or where I first saw the previous movies – presumably on video at a friend’s house. So something good did come of those free tickets. They enabled me to reassess my opinion that Mad Max, despite holding the world record cost-to-profit ratio for twenty years, was the weakest film in the series. (The Road Warrior was always, in the words of JG Ballard, ‘punk’s Sistine Chapel’.) While I have watched the first two multiple times over the years, I have only seen Thunderdome twice – and not since it was first broadcast on television. So how do they hold up? 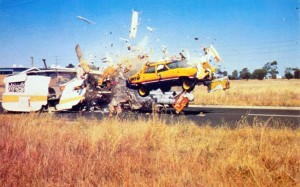 Mad Max starts off as a properly sleazy ozploitation flick: a tubby copper in leather spies through rifle sights on a couple having sex in a field; an insane car chase ensues. There will be more bare bums in the franchise (and car chases).

Mad Max was one of the first Australian films to be shot using widescreen anamorphic lenses but George Miller’s real innovation was to mount the cameras on speeding cars and motorbikes so very close to the ground. It does not sound like a lot, but it was, and remains, breathtakingly perilous to watch.

Accounts of the film often take note of Miller’s work as an emergency room doctor, and of several incidents during the OPEC crisis when – in full Ballardian mode – regular folks queuing for fuel violently turned on each other. Clearly some kind of autogeddon was in the ozploitation air (see also: Peter Weir’s The Cars that Ate Paris (1974), one of the earlier Australian films to use widescreen anamorphic lenses, whose spikey Volkswagen is homaged in Fury Road; Ian Barry’s Chain Reaction (1980), which stars Mad Max‘s Steve Bisley,  Hugh Keays-Byrne and, as an uncredited bearded mechanic, Mel Gibson; Brian Trenchard-Smith’s Dead End Drive-In (1986), based on Peter Carey’s story;  and, in a slightly different vein, Richard Franklin’s Road Games (1981)).

I was not surprised to hear that for Fury Road, George Miller presented Tom Hardy with a 300-page ‘comic’ made up of storyboards, rather than a conventional screenplay because Mad Max – with its generic mix of AIP biker movie, backwoods Straw Dogs/Deliverance rape-revenge narrative, lone gunfighter/sheriff/samurai seeking revenge/justice, rogue cop brought out of retirement one last time and this time its personal – comes across increasingly like a 2000AD strip. This connection with the other Sistine chapel of punk comes full circle, first in Neil Marshall’s underrated Doomsday (2008), which riffs off The Road Warrior but also in its final shots gives Rhona Mitra a Carlos Ezquerra/Mike McMahon big boots look, and then in Fury Road, co-written by Brendan McCarthy, who started working on 2000AD in the late 70s and then, inspired by Road Warrior, co-created the post-apocalyptic surfer comic Freakwave (1983). Some consider Freakwave to have been plagiarised by Waterworld (1995), which was dubbed ‘Road Warrior on water’ back in the day. ‘All at sea’, more like.

Mad Max’s melodramatic transitions in particular have something comic-book about them – foreshadowing Sam Raimi’s more obviously comics-inspired Darkman (1990) – and, to be honest, much of the dialogue would probably work better as speech bubbles. The stand-out dialogue scene is the one in which Mel Gibson, with his oddly immobile face, emotes, trying to say something incomprehensible to his wife about his feelings for her in terms of feelings he had for his dad but never expressed. Or something like that. Wisely, to shut him up, she kisses him. And considering how unwise kissing Mel Gibson actually is, we should thank her. She may be overly taken with the idea that running right down the middle of the road is the best way to flee murderous bikers, but right then, at that snoggy moment, she takes one for the team.

Mad Max is only Gibson’s second film and, although he has yet to become completely insufferable, the construction of his image of physically battered masculinity – the shirtlessly electrocuted resistant-to-electrocution Martin Riggs getting his ass handed to him by the mighty Gary Busey in Lethal Weapon (1987), the shot-to-pieces Martin Riggs annoyingly not dying in Danny Glover’s arms in Lethal Weapon 2 (1989), the hammer-to-the-toes justifiably tortured hardly-Lee-Marvin of Payback (1999), culminating in all those unpleasant things people do to Jim Caviezel in The Passion of the Christ (2004) – is already gearing up as he (somewhat ineptly) wreaks his revenge.

Given Gibson’s occasional homophobic outbursts, I vividly recall being delighted to discover that, at least in the olden days, he used to have a big enough gay following to provide one of the case studies for Michael DeAngelis’s Gay Fandom and Crossover Stardom: James Dean, Mel Gibson and Keanu Reeves (2001). I am however quite mystified as to the source of this, or indeed any hetero, attraction. Sure, in Mad Max, he is young and pretty and wears tight black leather and does not yet have a mullet. Is it that? Or is it his later tendency to be as shirtless as Matthew McConaughey while wrestling in the rain with Gary Busey or otherwise taking physical punishment? A suffering that in some ways maps onto his Judy Garland-like life of dislocation and addiction and abuse (although admittedly he is the abuser, not the abused)? Please tell me it is not the mullet.

Oh, and Main Force Patrol? Come on, people, that is not what MFP stands for.