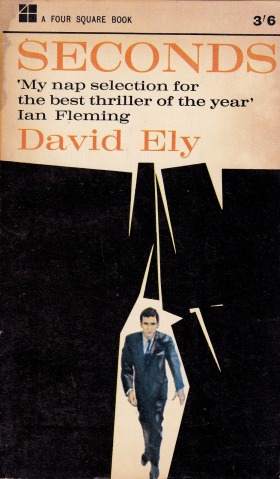 A middle-aged New York banker, who may or may not be called Wison, leaves for lunch, intending – perhaps – never to return. Charley, a friend who faked his own death, wants to introduce Wilson to the company that arranged for his rebirth into a new life with a new identity. Wilson tries to weigh his prosperous but dull existence against this chance to start over, only to discover that the company has already set the process in motion and set him up as a rapist should he try to back out. His reluctance fades under the gentle persuasion of the old man who founded the company (a mildly Kafkaesque organisation, its friendly, professional façade barely conceals the brutal indifference of its economic structure).

Wondering how long it will be before he is missed – ‘Days might go by, even weeks … and then, quite by chance, his wife might decide to organize a dinner party for eight, say, and in the course of reviewing seating arrangements, would discover, to her annoyance, that he was simply nowhere to be found’ (42) – Wilson undergoes extensive cosmetic surgery to become the thirty-something bachelor and successful painter, Antiochus Wilson. Relocated to California under the care of a servant, John, assigned to help him through his ‘initial period of adjustment’ (65), Wilson struggles to fit into his new life. Unable to paint, his self-alienation, which has never entirely disappeared, returns in force when a voluptuous teenage model hits on him. He realises that he must root out ‘the habits of nearly five decades’ (74) if his rebirth is to be meaningful. Charley phones again, rather too anxious to explain that Wilson is living ‘a dream’, composed of financial independence, social mobility and lack of responsibility, on ‘the frontier of personal freedom’ (82). As in Ira Levin’s The Stepford Wives (1972), this dreamworld is available only to men. Some of Wilson’s neighbours are ‘reborns’, briefed to fake knowing him. All of them are ‘“about 40,” and … engaged in rather vague occupations’ (86); and one of them, Bushbane, warns Wilson that his ‘passing phase’ threatens their ‘tremendous monetary investment’ (97).

Wilson, posing as a friend of his old self, visits his daughter but is disillusioned by her view of the man he had been. Despite the company’s efforts to dissuade him, Wilson also visits his own ‘widow’, but to his surprise and dismay Emily has moved on with her life, remodelling and redecorating the house, effectively removing all trace of him. He surrenders to the company, imagining that he is going to be reborn again, this time with his input so as to avoid the errors of the first attempt. Spending his days in a room full of mildly tranquillised men, including Charley, he is badgered for the names of friends or acquaintances who might be interested in the company’s service. When he is finally summoned for surgery, he slowly and resignedly realises that he is not going to be reborn. He is to contribute his corpse to another client’s fake death.

John Frankenheimer’s adaptation – the third of his borderline sf movies, after The Manchurian Candidate (1962) and Seven Days in May (1964) – follows Ely’s plot fairly closely, eschewing the possibility of transforming it into another broad canvas political thriller in favour of the more individual focus of his non-sf The Birdman of Alcatraz (1962). Saul Bass’s opening credit sequence collages distorted views of a face reflected in a curved, metallic surface, recalling his title sequence for Hitchcock’s Vertigo (1958), another film about appearance and identity, and indicating the skewed visual style for which Frankenheimer and cinematographer James Wong Howe opted.

The film opens with two men moving separately through the crowds in Grand Central Station (much of the film is shot on location). Howe used extremely wide-angle (9.7mm and 18mm) lenses, which allow greater depth of field, magnify the apparent distance between objects, and produce perspective distortion (especially in the frequent low angle shots) and barrel distortion fisheye effects. (Howe also makes innovative use of handheld cameras, a camera wheeled along in a suitcase and a chest-mounted camera that provides close-ups of the actor wearing it; elsewhere in the film, Howe anticipates the effect of the 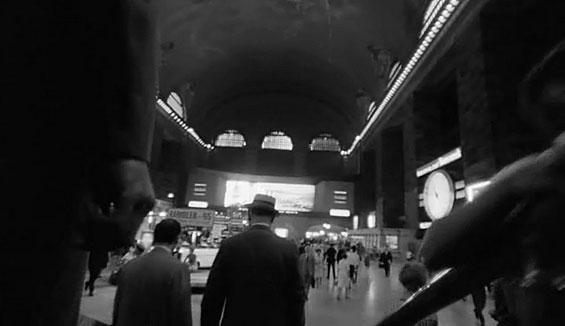 not-yet-invented Steadicam by shooting handheld from a wheelchair.) The uncertainty and instability of the space thus produced is accentuated further by David Newhouse’s editing, which pushes the classical continuity system towards the more improvisatory style of the French New Wave. As Arthur Hamilton (John Randolph) boards his commuter train, the second man passes him a note. It is the second time the company have made contact, following a phone call the preceding night from Charlie Evans (Murray Hamilton). In a departure from the novel, we actually witness some of Wilson’s solidly bourgeois home-life, as Emily (Frances Reid) collects him from the station. That night, Charlie phones again, and the next day Hamilton leaves the bank to be reborn as Antiochus Wilson (Rock Hudson).

In the early pages of the novel, Ely’s tight control over first-person narration create a strong sense of a man alienated from the world around him and from himself, restricting our knowledge of the cautious, self-doubting, self-deceiving protagonist to incidentally revealed information. Howe’s deep focus black-and-white cinematography achieves a similar effect: extremely wide-angle compositions separate Hamilton from the people and objects around him; two-shots keep Hamilton and his interlocutors in perfect focus at opposite ends of the depth of field; and wide-angle close-ups simultaneously make faces appear to loom out of the screen and seal them off behind a curved, hermetic surface. (In

the sequence in which Hamilton dreams he is raping a woman – only to discover later that it was staged and filmed while he was drugged – Howe’s fisheye lens is aided by a set with visual distortion already built into it. The film also features mild aural distortions throughout, with post-synchronised dubbing of most of the dialogue necessitated by shooting on noisy Arriflex cameras.)

The transformation of Hamilton into Wilson culminates in an effective double revelation. Although audiences might have been expecting Wilson’s new face to be that of Rock Hudson, who through the 1950s and 1960s epitomised a certain kind of hedonistic bachelor lifestyle (see Cohan 264-303), it is a Rock Hudson they had never seen before: white-haired, gaunt and scarred, enfeebled by surgical procedures. Frankenheimer uses 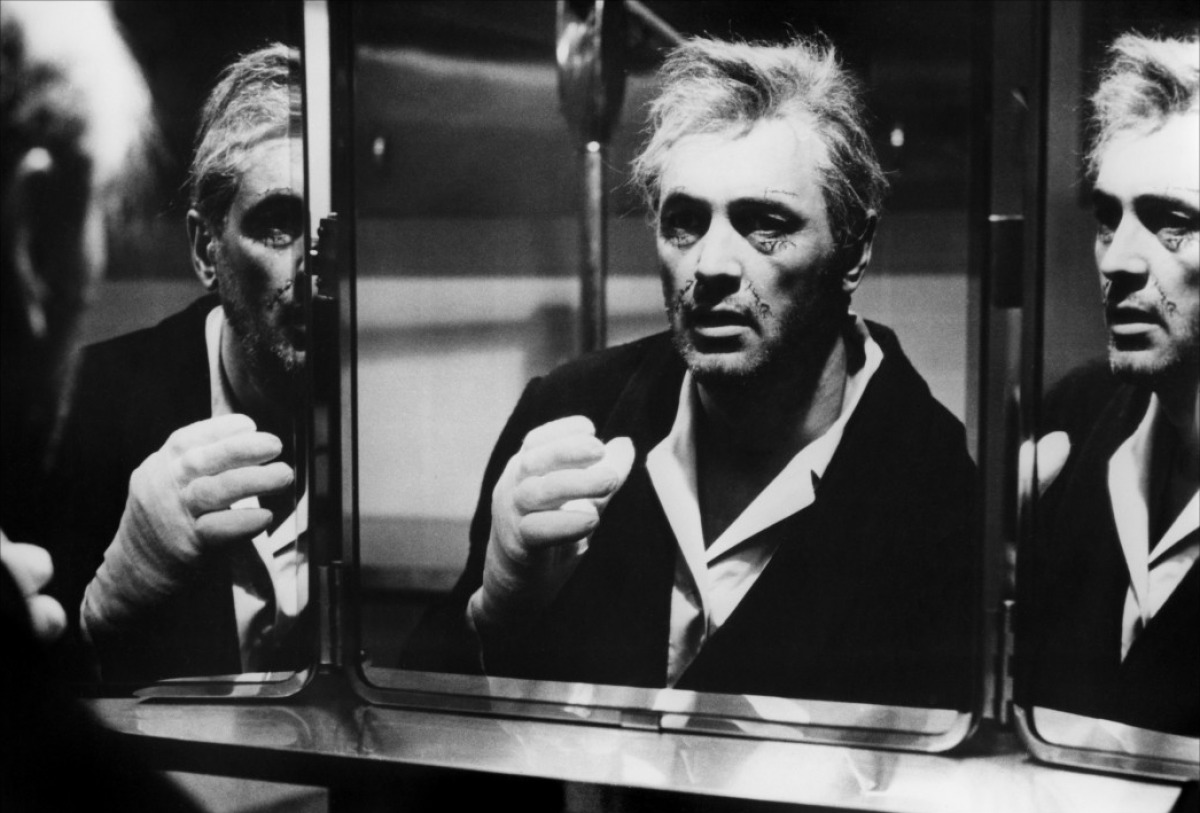 the stiffness that sometimes infects Hudson’s performances to great advantage, upsetting the familiar ease with which one might expect him to occupy the spaces of Wilson’s stylish Malibu beach house. Instead, the uncertainty with which he moves through its rooms suggests not only the unfamiliarity of his physical and social location but also of his own body. It lends a vulnerable fragility to Hudson’s performance of loneliness, isolation, self-disgust and dread. (Later, when he returns to Hamilton’s home, he looms awkwardly, completely out of place.) 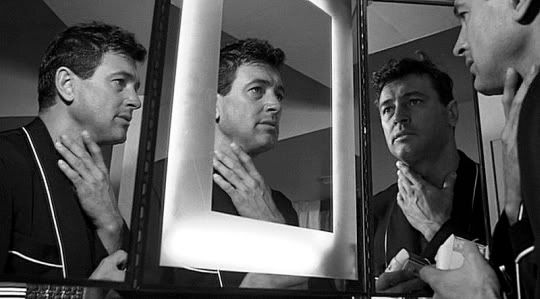 In the major divergence from the novel, Wilson begins a romantic relationship with Nora Marcus (Salome Jens), a woman who walked out on her previous life as a wife and mother. She takes him to a bacchanalian revel, in which middle-class countercultural types celebrate the grape harvest, crown the Queen of the Wine, and indulge in mass, nude grape-treading. This is perhaps the most badly-dated sequence of the film (it was heavily cut for the US release, ironically making this rather innocent event appear far less innocent, but the missing footage has been restored from the version released in Europe). However, Hudson’s own reported discomfort with such nude celebrations – which seems evident in his posture – effectively expresses the gulf between who Hamilton was and Wilson is. His climactic leap into the vat to tread the grapes with other revellers carries less conviction.

Frankenheimer also claims to have got Hudson drunk to enhance his performance in the following cocktail party sequence, although Wilson’s trajectory from tipsy to laid-back to dishevelled is well within Hudson’s unaided range. The sequence is rather more remarkable for its invigorating use of multiple hand-held cameras, and for Newhouse’s editing, which eschews then-conventional transitions between shots, locations and events. As in the novel, the party culminates in Wilson talking about things which are no longer supposed to be part of his identity, but it is only after Charlie reveals that Nora is a company employee that he decides to visit his ‘widow’. (Wilson’s visit to Sue was shot but cut to reduce the film’s run-time, and the negative appears to have been lost.)

The film ends with Wilson, who has returned disillusioned to the company, finding himself gagged, strapped to a gurney and being wheeled into the Cadaver Procurement Section. Wildly distorted by a fisheye lens, he struggles against his bonds, but to no avail. A corpse with his build is required in the staging of a ‘fatal’ automobile accident.

Despite Frankenheimer’s close adherence to Ely’s narrative, he considerably transforms its meaning. The novel is an oddly moralistic, and unthinkingly misogynist, absurdist thriller about the dissatisfactions of the grey flannel suits who were produced in droves during post-war America’s period of corporate consolidation. It is critical of a culture that had overseen a shift in dominant notions of masculinity (from the individual, physical and entrepreneurial, to the corporate subject of hierarchical structures) and which construed wives and families as the true beneficiaries of white-collar labour. In Frankenheimer’s film, which casts a number of formerly blacklisted actors and writers in minor roles, this complaint is made less insistent by the absence of first-person narration. While it does resonate with films noir about masculinity threatened by and trapped within corporate environments and expectations, such as Double Indemnity (Wilder 1944), The Big Clock (Farrow 1948) and Pitfall (De Toth 1948), it never quite achieves the existential crises of The Face of Another (Teshigahara 1966), adapted from Kōbō Abe’s novel. Ultimately, Frankenheimer’s film is perhaps best understood in terms of its exposure of the gulf between American realities and American dreams, and of its peeling away of the fantasy of being Rock Hudson (and all that his model of handsome, charming, pleasure-seeking, consumerist masculinity represented) – a fantasy embodied by the actor’s star persona on- and off-screen, but made all the more poignant by subsequent revelations about his sexuality. 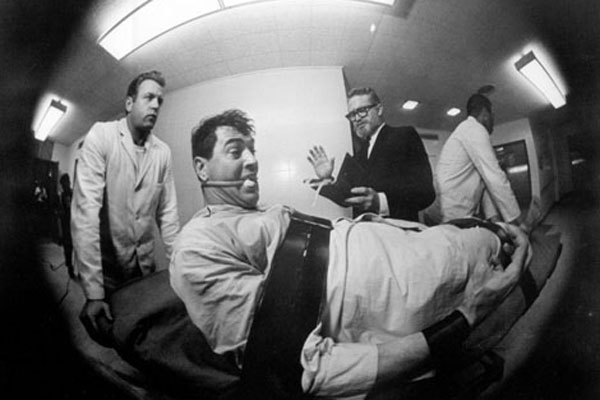