This is the second episode not to have survived (apart from its final credits and filmed inserts of newspaper headlines). This is particularly annoying since it is the only episode out of 49 based on a story by a woman. Kate Wilhelm’s ‘Andover and the Android’ was one of several original stories among the reprints in her The Mile-Long Spaceship (1963). When the collection was published in the UK in 1966, it was retitled Andover and the Android, presumably because the adaptation had given it recognition value. Curiously, although the story order was shuffled, ‘Andover’ did not become the lead story. (Out of this World also only had one episode based on a story by a woman, Katherine Maclean’s 1951 ‘Picture Don’t Lie’ (11 August 1962).)

Wilhelm’s story begins with Roger Andover facing a choice between the death sentence or narco-analysis, which will wipe his memory and personality. (Or something like that – it is not the clearest of opening exchanges or penal systems.) While deciding on his course of action, he recalls what brought him to this juncture. A confirmed bachelor, he was urged to marry in order to be deemed suitable for promotion to a corporate vice-presidency.

Not normal? Just because he liked an orderly life? Just because he loved his music and his books? Because he had never met a woman who could share his interests and not be cluttering his life with a lot of nonsense about changing the apartment and having a horde of messy children underfoot? Because he couldn’t abide women who had to run things, had to interfere constantly, had to manage me the same way they managed money, children, vacations, everything else he could think of? Damn it! He liked living alone. … The fact that he considered marriage slightly irregular seemed not at all odd to him, but explicable in light of the nature of women; and his own celibate life he privately concluded was a result of the happy circumstances that had seen fit to place him higher on the scale of rationality than his fellow man, to give him a keener insight concerning the machinations of the female mind. (116)

Andover seems to fall halfway between a queer stereotype – he is gourmand; he visits Roman ruins, Parisian galleries, German cathedrals, Venetian concerts – and the kind of sophisticated, consumerist playboy figure Hugh Heffner introduced into fifties culture (played so well by Rock Hudson), without quite being either. So as the pressure mounts, he uses blackmail to have a 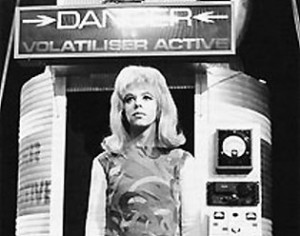 ‘perfect wife’ made for him, even though it is illegal to own personal androids. Lydia is a groundbreaking prototype, utterly convincing. And of course – yet to his complete surprise – he grows accustomed to her ways. He falls in love with her.

When Lydia begins to malfunction, the executive Andover has been blackmailing sees his chance: instead of repairing her, he destroys her, embezzles half a million dollars and flees the country. That is when the police become suspicious about the disappearance of Andover’s wife…

Like the last episode’s source story, ‘Andover and the Android’ is rather slender for an hour-long drama. Adapter Bruce Stewart – who would also adapt Colin Kapp’s 1962 ‘Lambda 1’ (20 October 1966) and write 19 of the 26 episodes of the underrated children’s sf series Timeslip (1970-71) – opted to expand the story by transforming it into a comedy. While a number of earlier episodes, regardless of where they are set, languish somewhere in the middle of the Atlantic, with English actors trying on often infelicitous American accents, ‘Andover’ is firmly relocated from a rather vague future US to the England of West End farces (and of an sf film such as The Perfect Woman (Knowles 1949)). The comic action described by Mark Ward in quite painstaking detail sounds laboriously unfunny, but apparently audiences responded well to it.

Andover’s scheme is altered slightly – he needs a wife so as to inherit a fortune, but he intends all along to dispose of her once he is wealthy.

And the conclusion is altered significantly. Rather than Andover declaring that he murdered his wife (presumably so he will be executed without it being revealed that he fell in love with a machine), the adaptation’s protagonist is himself mistaken for a faulty android and destroyed, while the faulty Lydia lives on. This blackly comic conclusion – which seems at odds tonally with the earlier farce – was also apparently well-received, according to audience surveys and newspaper reviews. Indeed, the episode was selected for a repeat (under its own title, rather than the series’) a month later as part of BBC1’s A Taste of Two season intended to promote the junior channel.

The episode was directed by Alan Cooke, who would also direct Frederik Pohl’s ‘Tunnel Under the World’ (1 December 1966). He had directed DH Lawrence’s own stage adaptation of Lady Chatterley’s Lover (the cast included Tom Criddle, who plays Andover and also appears in the series’  adaptation of Mordecai Roshwald’s 1959 Level 7 (27 October 1966), scripted by JB Priestley). Cooke was also a classmate at Cambridge with Tony Richardson and John Schlesinger (apparently Andover at one point orders a ‘simple auberge a la John Schlesinger’; Cooke’s brother Malcolm edited Schlesinger’s Far from the Madding Crowd (1967)).

It would have been nice to see it. And not just because Fulton Mackay was in it.

Last episode, ‘The Fox and the Forest’
Next episode, ‘Some Lapse Time’

References
Mark Ward, Out of the Unknown: A Guide to the Legendary Series (Bristol: Kaleidoscope, 2004)
Kate Wilhelm, ‘Andover and the Android’, The Mile-Long Spaceship (New York: Berkeley Medallion, 1963), 115-127.