It has always been there, always been part of my love of Lowry, but only now has it become clear. Our context summons it, gives it voice.

The world that is being made over into a mire, a midden, clogged with the filth unleashed by capital’s emancipation of sunlight captured long ago, its unleashing of carbon compressed and incarcerated far beneath the surface. 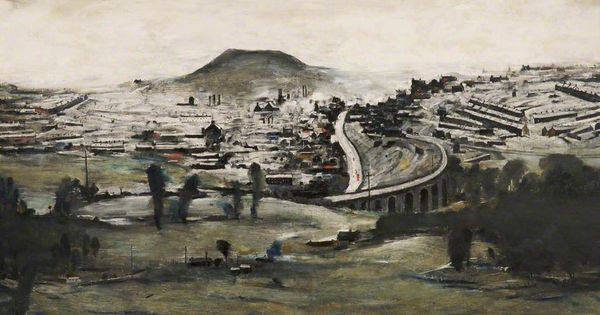 (In passing, I love the tiny splash of red, the bus coming down the hill; I also love the outrage of several Salford councillors when the city spent 54 guineas on the first of the seascapes below because there was nothing in the picture, not even a boat.)

But Lowry, for all his matchstick men and matchstick cats and dogs, also painted the world without us. A world desired, a world restored, in which we are a memory at most – a mark on the land, a residual trace of that which has passed, as in this impish female nude called ‘The Landmark’.

Such towers outlast us, move off into abstraction as we recede from being. 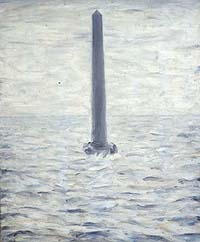 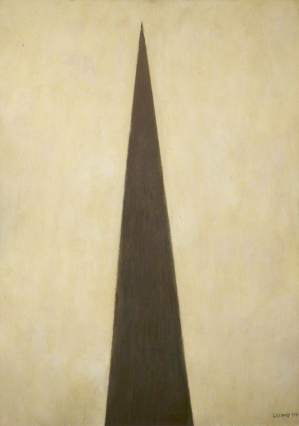 And beneath them, sometimes, there is the sea.

Lowry often spoke of the sea in relation to loneliness, but his seascapes move beyond that particular personal psychological sensibility. They are images of the world in which human categories, our separations of it all into distinct things, no longer hold.

Our spectrality, our deathliness, always there in the portraits and figures, attenuates, fades, disperses.

So yesterday we ended up in Salford’s Media City, which should really be pronounced as a single word, mediacity – somewhere between mediocrity and mendacity. 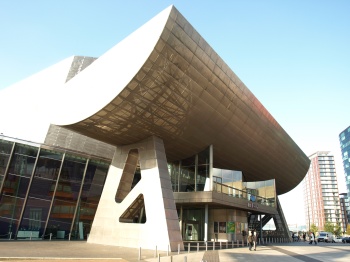 The rather striking Lowry theatre/gallery sits on the edge of one of those windswept plazas contemporary regeneration schemes, vaguely recalling a trip to Italy, insist upon, regardless of climate. Opposite is the insulting Lowry Outlet Mall. And all around are luxury apartment blocks, astonishingly mundane and uniformly balconied, again regardless of actual fucking climate.

I asked whether it was mean to imagine the inhabitants spending most of the year staring out through their rain-streaked windows at the stacks of grey clouds, wondering whether they should bring their mountain bikes in, and to relish the prospect of the handful of sunny days in which Salford and Manchester decant increasingly drunk and loud and red people into the area?  And hoodies sparking clogs, or whatever it is the kids do on the corner of the street nowadays.

Apparently it is not mean; in fact, asking seemed to make other people happy. 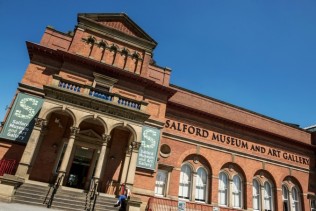 But we were there to see the Lowry paintings, only recently abducted from the Salford Museum and Art Gallery (opened in 1850, it was the first free public library in the UK). The exhibition is not as substantial as the one we went to at Tate Britain, but is probably more representative of Lowry’s range, and there weren’t twenty or thirty people between you and each picture.

There is much to love about Lowry.

The comic grotesquerie of his figures, most based on actual people, comes from a place of utter sympathy, and the settings make it clear that their deformities and infirmities are a product of the environment in which they live – an industrial landscape organised for profit, not for health and well-being and fullness.

The way his cats look like rats, and his dogs look like cats or rats or miniature sawhorses, as if he has never actually seen one and is working from a combination of poor verbal descriptions and kids’ paintings on fridges.

The way even his sauciest of images talks of constriction and constraint.

The way he would begin by painting a completely white background. He started doing this in response to a critique of the darkness of his paintings – his early impressionist work is not so much about the play of light on surfaces as its absence – but the result is to ensure a different and mundane kind of darkness: our mortality; the bone beneath; how tenuous we are. 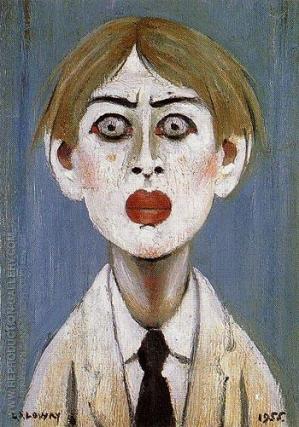 His Anthropocene unconscious. But more of that tomorrow, or when I next get a few minutes.