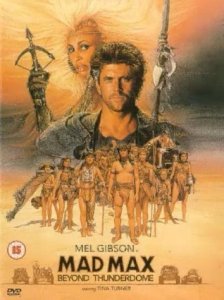 This is the one that broke the franchise.

It is the one with the audacity to have a character claim, early on, that ‘We’re dealing with subtlety here’. And the bravery, moments later, to let Aunty (Tina Turner) ask, ‘You can shovel shit, can’t you?’

It is the one featuring the Goonies outback adventure. It is Max Rockatansky’s Kindergarten Cop. His Mr Nanny, his Pacifier, his Game Plan. It is Dad Max.

It is the one that makes Waterworld look not so very terrible after all.

It is a poxalypse, full of pain.

It begins with a drum-machine, for chrissakes.

It is full of other terrible 80s things, such as a shockingly ill-judged Maurice Jarre soundtrack and a dreadful saxophone that, for a moment, fills you with dread 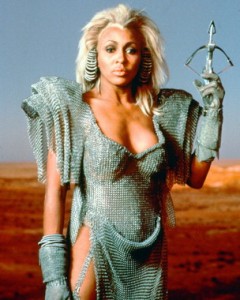 that Aunty will be played not by Tina Turner – whose chainmail shoulderpads are even more awesome now than they were thirty years ago – but by Al Jarreau.

Beyond Thunderdome lays bare the insidious effects of LucasSpielbergianism.

Costing five times as much as the first two films added together, it made rather less than them added together. But a bigger budget meant a drop in the certificate. Which meant replacing innovation with competence. Which meant abandoning crude, robust, imaginative and often very skilful filmmaking in order to imitate the less-than-stellar Indiana Jones and the Temple of Doom. Badly.

It reworks the climactic chase from Road Warrior.

As if Health and Safety finally caught onto some of the crazy shit George Miller was doing.

It is like some Spacehunter: Adventures in the Forbidden Zone (1983) knock off.

While Tina Turner is fabulous as the same-sex-yet-somehow-cross-dressing Aunty, it is disappointing to see the queerness of this future has been muted in the fifteen years since the events of Road Warrior. (I have no idea how the scantily-clad musclemen cranking Bartertown’s elevator managed to sneak unnoticed through the straightening of the post-apocalypse, but I’m glad they made it and are thriving.)

Although there are plenty of stereotypical signifiers of non-white ethnicities – Max’s burnoose and camels, the didgeridoos on the soundtrack early on, Maurice Jarre’s delusion that he is scoring Taras Bulba (1962), the plane-crash-surviving kids’ version of Aboriginal art and make-up – it remains a fairly pallid future in which whitey has learned almost nothing from these cultures about practical fashions for desert environments. One can only assume that Bartertown is built in a quarry (some of the time) because they are mining for sunblock. And talc. And, of course, vaseline. 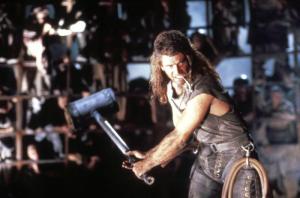 When the movie came out, Roger Ebert, who loved it, raved about the Thunderdome fight sequence, calling it ‘the first really original movie idea about how to stage a fight since we got the first karate movies’ and ‘one of the great creative action scenes in the movies’. It was never that good and doesn’t really hold up that well. But it can be made fabulous by taking the time to set up a second screen so you can synch it to the Peter Pan scene from 21 Jump Street (2012).

Much was also made of the alternative Riddley Walker-lite English spoken by the kids who grew up in isolation without any adults around. This linguistic drift, which has none of the post-apocalyptic horror of the final minutes of Threads (1984) either, would have perhaps seem more innovative if a few minutes earlier it hadn’t been revealed that in Bartertown the meaning of the word ‘gulag’ had shifted to mean ‘to be driven into the desert to die while sitting backwards on a horse with a giant papier-mache head on your head’.

So, besides Tina Turner, is there anything good about Beyond Thunderdome?

Well, it provides an opportunity to admire some of the early work by Terese Willis from Neighbours, formerly Sophie Simpson from Home and Away.

It was nice to see Bruce Payne return, playing a character indistinguishable from the one he played in Road Warrior but definitely intended by Miller to be a different character, which doesn’t quite explain how Max recognises him, unless it is a version of that joke in the A-Team title sequence when Face recognises a Cylon.

And it was nice to see the sarlacc pit get work again, even if it never did manage to break free of the way it was typecast by Return of the Jedi…

Oh, and the first thing the kids do after rescuing Max is cut off his mullet. Which at least puts it ahead of Steel Dawn (1987), at the conclusion of which Patrick Swayze is permitted to stride off into the sunset, mane uncropped.