Scriptwriter Stanley Miller and director Peter Potter, responsible for series opener ‘No Place Like Earth’, return with Ballard rather than Bradbury for an episode that is just as talky but overall rather more effective. This is in large part down to casting of British film and television stalwart – and one-time Moonbase commander (see Barry Letts and Terrance Dicks Moonbase 3 (1973)) – Donald Houston in the lead role of Francis. Always more likely to be a sidekick  than a leading man, he is reliably reliable, a curious mix of stolidity, occasional passion and uncertain humour.

Ballard’s story, originally published in Amazing Science Fiction (April 1962), is set up as one of those generation starship stories in which people do not realise they are on a generation starship until they and you discover that they are – like Robert Heinlein’s 1941 ‘Universe’ and Brian Aldiss’s 1958 Non-Stop (unless you had the misfortune to buy it under the US title, Starship, which kind of gave the game away) and Syfy’s plodding Ascension (2014). There is also more than a hint of Isaac Asimov’s 1941 robot story ‘Reason’ – adapted in the second season as ‘The Prophet’ – to it.

Abel, who is young and problematically smart, begins to work out what is going on, so Francis, the ship’s doctor tells him all about their mission to Alpha Centauri, commenced before Abel was born and not to be completed within his lifetime. Ballard’s extra twist, of course, is that Francis is lying – the mission is a simulation. The fake starship is housed in a dome on Earth, and its crew are under constant surveillance in order to see how an actual crew would fare during a real mission. It has been running for half a century, and following the failure of moon and Mars colonies, interest has waned and budgets are being cut. Under this increased pressure, Francis – who is secretly able to enter and exit the ship – elects to join the crew permanently so as to help them survive whatever method is found to curtail the ‘mission’. Like Kerans in The Drowned World, Ballard’s novel from the same year, Francis heads further in, embracing the catastrophe rather than fleeing from it. (Ballard’s solar imagery also plays a role in the story.) 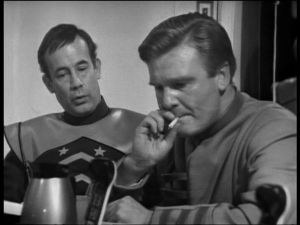 First, Abel decides he wants to build an isolation experiment inside the starship, itself an isolation experiment – the kind of nesting of simulations within simulations found in some of Frederik Pohl’s short stories and in Daniel Galouye’s Simulacron-3 (1964) before becoming a mainstay of unsurprisingly unsurprising surprise VR stories. (One of the nice, if unintentional, things in the episode is that when Francis exits the starship and descends into the dome housing it, the landscape depicted on the studio wall in the background is obviously fake, giving an uncanny frisson to it all by suggesting that the primary narrative diegesis is also a simulation. Who knows? This might even explain why the monitors’ uniforms are way more space opera-ish than those of the starship crew. (Except it doesn’t.))

Second, it becomes clear that, at some unspecified point in the story, Abel has discovered and embraced the true truth of his situation but also that he is not the first on the starship to have done so. These are precisely the kind of thing one now expects from a Ballard story that must have been stunning at the time – they certainly wobbled my world a little when as a teenager I first read the story.

The story also always reminds me of The Prisoner (1967–68), the quintessential British sf tale of simulacral societies, isolation experiments, conditioning, paranoia and indeterminate realities. Ballard’s story is likewise an ambivalent tale of countercultural youth rebellion that doesn’t really like youth or the counterculture or rebellion, that is rather priggish and authoritarian, and that features a protagonist (or two) with whom it is impossible to empathise, difficult even to sympathise, but whose travails you nonetheless follow with interest. 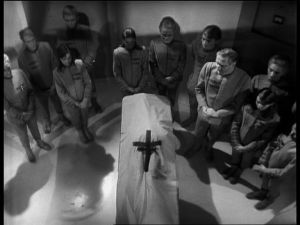 First, with its opening scene of Captain Peters’ funeral it introduces a religious undercurrent into proceedings, from the crew’s dubbed singing of ‘Onward Christian Soldiers’ to a religious monomania that possesses Abel – or at least becomes part of the rhetoric he introduces into the experiments in conditioning he performs on Francis.

Second, while Ballard’s story concludes on an ambiguous note, with Francis discovering that Abel and probably Captain Peters knew that the starship was a fake, the adaptation ends with the suggestion that Abel, who, like Satan, would rather reign in hell, has completely broken Francis, who now believes he really is part of a mission to Alpha Centauri.

The adaptation, however, is no more capable than Ballard of clarifying exactly who are the thirteen of the title.

In Ballard’s story, at one point a slip of Francis’s tongue reveals that he considers himself one of the 14 en route to Alpha Centauri – although there only 13 people in the crew, plus himself as an observer who knows the truth. After Peters’ death, there are 12 plus one, or possibly 11 plus two, which is how things stand at the end of the story (although the revelation that Peters’ had also known what was going on demands a further recount). In the adaptation, the early disposal of Peters forces Miller’s script to change these numbers. Francis implies he counts himself among the 13, although there are only 12 left plus himself as an observer. At the end of the episode, Abel knows they are going nowhere but Francis seems to have been conditioned into believing they are en route to Alpha Centaurus. So there remain 12 believers and one observer. But in Francis’s closing exchange with Abel, there is talk of Abel controlling the 13 people on the ship – but for that to add up, Abel must be one of the 13 Abel is controlling.

Though to be honest, having just worked all that out, I am not entirely sure I care.