Today, at the Wellcome Trust, I saw an old poster for Julia Pastrana, who was born with hyperpilosity and travelled the world as a ‘freak’ known as The Nondescript.

Turns out ‘nondescript’ used to mean something like ‘transcendent’, irreducible to your measly human categories.

Tonight I watched Captain America: Civil War (Russo and Russo 2016). Turns out that that is no longer the meaning of ‘nondescript’.

To be honest, I’d forgotten there was a new Fantastic Four movie coming out until the trailer appeared yesterday.

My memory was lagging behind in other ways, too. For the life of me I could not figure out why they’d cast Michael B. Jordan as Ben Grimm/The Thing.

My mistake. They’ve actually cast Jamie Bell, and I’m good with that.1  Jordan is playing Johnny Storm/Human Torch. There was, tediously and of course and now dimly remembered, some kerfuffle about the casting of an actor of colour in a role of pallor. The usual racist bullshit tweeting and trolling. It seemed to die down pretty quickly, especially after Jordan, caught off guard, snapped back ‘You’ll all come see it anyway’. Which is not quite a Neil Patrick Harris well, duh moment, but not bad on the fly.

My confusion about who was cast as who does actually make a kind of sense. Because the Thing – although perhaps not quite as obviously as The Hulk – was always one Marvel’s black buck stereotype superheroes.

The Hulk is inspired by Dr Jekyll and Mr Hyde, and Hyde is clearly racialised in Robert Louis Stevenson’s short novel from 1886, and even more so in the 1932 adaptation

starring Fredric March, in which Hyde clearly signifies some kind of simian negritude. (It is always worth remembering that the multiple trials of the Scottsboro boys – a case more typical than exceptional – were dragging on through the first half of the 1930s, even as Dr Jekyll and Mr Hyde, King Kong, James Whale’s Frankenstein, Erle C Kenton’s Island of Lost Souls and other fantastical American racial fantasies were appearing in cinemas.) 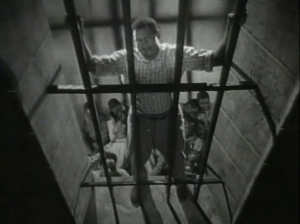 The Thing builds more obviously on the combination of buck stereotype and proletarian image with which Whale imbues Mary Shelley’s creation (building on her description of Frankenstein’s apocalyptic vision of his creations breeding and producing a new posthuman race that will displace aristocratic privilege and white hegemony) and which he explicitly and sympathetically develops in Showboat when Paul Robeson sings ‘Ol’ Man River’. 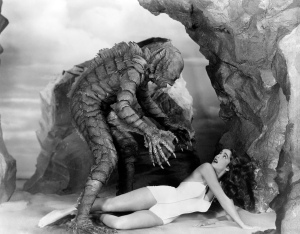 is a close relation. The appearance of this archaic fishman can easily be interpreted in terms of racist caricatures of African/Afrodiasporic peoples. Something of his melancholy aquatic courtship of Kay, her whiteness emphasised by her dazzling white swimsuit, is carried forward into the sequence in The Fantastic Four (2005) when Ben’s engagement is called off. The racist imagery of the black buck as sexual monster/monstrously sexual it evokes – his finger is just so big he can’t get it into the tight little engagement ring – falls somewhere between unfortunate and hilarious. 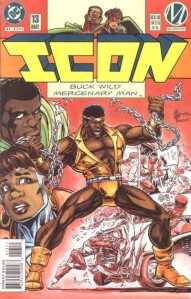 And of course, early in his comics career Luke Cage, Power Man – later spoofed, a little unfairly, by Milestone Comics as Buck Wild, Mercenary Man – subbed for the Thing in the Fantastic Four, and soon after had his own side adventure in Latveria with Doctor Doom.

So like I said, my confusion makes a kind of sense. But nonetheless, I am curious about my own unreflective assumption that Jordan was playing the Thing, while also profoundly untroubled by him playing Johnny Storm, a character with plenty of potential (as Chris Evans showed, albeit whitely) to be just another ‘one of those Tom Slick brothers that think you can get by on good looks, a wink and a smile’ (as Black Dynamite‘s Gloria might put it).

The one thing I dread however – partly because over the years I have seen so much awkward, straight-to-video exposition justifying Jean-Claude Van Damme’s Belgian accent to American ears – is the painful scene explaining how come Johnny’s sister, Sue, is white.

I mean, deep down there is a part of me that does actually want to see it, and be appalled by it. But we really could do without it.

1
Someone somewhere please, in an alternate universe if not this one, cast him in the other FF franchise, post-Paul Walker, to take up the whiteboy slack alongside Lucas Black.

In 2011, the British Con-Dem coalition government imposed massive cuts to public spending, ostensibly to reduce the national deficit. The funding shortfalls produced by this austerity programme were to be met by opening up public services – schools, hospitals, universities, hospitals, libraries, and so on – to corporate investment and, where the profitability was likely too be too small or too distant in time, voluntary work within the affected communities. This latter option, known as the Big Society initiative, met with little success and was quietly dropped from political and news agendas. Not, however, before introducing the country to an array of costumed crimefighters and, eventually, a handful of genuine heroes.

Memos and recordings of secret high level meetings leaked to the press in 2015 show that, in an attempt to reduce the cuts to the police service, senior officers conspired to provoke the wave of protests sweeping the UK into violence. They reasoned that the greater the threat to property – one tape reveals officers agreeing to use ‘public order’ as a euphemism – the more likely corporate bosses were to pressurise politicians into maintaining, perhaps even expanding, the police budget.

Many aspects of police work were suddenly opened up to competitive tender, with tax-payers’ money diverted into the coffers of multinational security consultant companies. The size of the police force was massively reduced. Many former officers found themselves employed by these new ‘security providers’ as freelancers or on short-term, zero-hour contracts, doing the same work for minimum wage or less. Only the least profitable of police work – crimes against people, particularly in the poorest sectors of society – were left to the barely funded police force.

Meanwhile, the tail-end of Big Society state initiatives encouraged neighbourhood watch schemes and other community groups to police their own streets. And while many people were concerned about the violence and injustices this introduced, the media lapped it up.

Richard Branson, Simon Cowell, Andrew Lloyd-Webber and Alan Sugar joined forces to produce Britain’s Got Talents, a show which uncovered the nation’s would-be superheroes, and The X-Factory, which followed each season’s finalists through superhero boot camp. For a while, their names were on the lips of school-children everywhere. Wicca Man. EastEnder. White Van Man. CiderMan, the west country cyborg.

General Dodd, the former head of Britain’s top-secret Meta-Human programme, came out of retirement and once more summoned his Diddy Men – a veritable army of forgotten bullies in long underwear – from the obscurity of their seniors’ villages and sheltered accommodation. Colonel Bogey, Boy’s Own, the Dandy, the Minx, Brown Owl, Victor, Hotspur, Warlord, Bullet, Starlord, the Space Hopper…

At first, only a handful dared to raise their voices in opposition.

Banned once more, and once too often, from a Liverpool mall because she refused to uncover her face for security cameras, a sixteen-year-old girl decided enough was enough. She burned down a militia R&R centre in a former library. She called herself Hoodie.

This first act of heroic resistance attracted others, and soon she was joined by Bradford’s The Muslamist. Then Wolverhampton’s ASBOy. Glasgow’s Northern Emergency Defence System. Billericay’s Counter-Hegemonists Against the Violent State.

And Citizen Media was everywhere, breaking the corporate stranglehold on information. ‘We are not the heroes,’ his broadcasts would conclude. ‘The people are the heroes, and it is time to get heroic.’

In the North, the Angel stirred.

The Insurgency had begun.