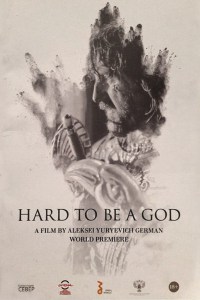 Hard to Be a God takes the bare armature of Boris and Arkady Strugatsky’s 1964 novel of the same name – human observers embedded among the population of an alien world, which resembles the terrestrial middle ages and in which the first traces of a Renaissance are being brutally expunged – and does something remarkable with it.

At times it reminded me of Andrei Rublev, of Aguirre, Wrath of God, of Seven Samurai, of Come and See,  of The Seventh Seal or The Virgin Spring, of Tetsuo, of Erasherhead, of Jodorowsky, of A Field in England, of Monty Python and the Holy Grail. And yet it is not remotely like them, or like anything else.

As early as the 1960s, Aleksei German was the Strugatskys’ director of choice, and it only took him half a century to make the film. His earliest attempt was halted when Soviet forces invaded Czechoslovakia in 1968, since a film about a fledgling Renaissance being crushed by an invading totalitarian power was deemed untimely. (German was also briefly involved in Peter Fleischmann’s disastrous 1989 adaptation.) In 2000, he finally began what would become a six-year-long shoot (partly in the Czech Republic), but he died in 2013, leaving his filmmaker son, Aleksei German, Jr., to finalise the edit and the soundtrack.

The Strugatskys’ often comic tale poses a series of ethical questions around the (im)possibility of humanitarian intervention akin to those with which Star Trek’s prime directive narratives feebly wrestle. Are there circumstances in which violence can be used to cut short the violence of others? Is it more cruel passively to observe than it is to step in with an overwhelming force that will turn a society on its head? What is the ethical cost to the observer/intervener? The Strugatsky’s novel can also be understood as an expression of anxiety about the re-emergence of Stalinism as the Khruschev-era Thaw drew to a close.

German transforms this material into something marvellously different.

A black-and-white world of rain and mud and shit and piss and snot and blood. Of raw sewage and rotting carcasses. Of grotesquery and deformity. Of violence and death. Of the idiocy, as Marx might say, of feudal life. 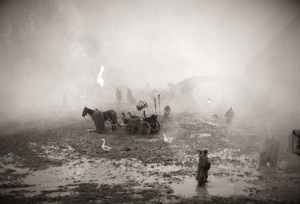 The frame is frequently crowded. Depth of field is constantly destabilised. Fog and smoke and pouring rain obscure the distinction between earth and sky, clouding out the horizon and disrupting perspective. Objects repeatedly cross the frame inches from the camera, blocking our view of what we might otherwise assume to be the subjects of the film. Characters repeatedly look straight at the camera, not to break the fourth wall but as if it is not there. Or as if the camera cannot be permitted to be in the world without being part of the world; and in this the camera is like the terrestrial observers. They are not permitted to stay, like a Federation away team, separate from the world they visit. They are immersed in it. Mired. And so are we.

It is like reading Rabelais, or reading Bakhtin’s reading of him; and in its relentlessness, Hard to Be a God is really funny.

The few Anglophone reviews of the film I’ve seen complain about the absence of a clear plot. But narrative obliquity is the point. Life doesn’t have a plot or narrative arcs. We are just in the middle of all this stuff going on all the time. And it is comical and absurd and messy and always in our faces.

If I’d been watching it alone, I’d have turned off the not-that-helpful subtitles.

Hard to be a God is obsessed with the odours of the world it can only disclose  indirectly, and with the textures of the world. It continually uses the limitations of the medium – the gulf between the tactile and the visual – to undercut the fiction of the neutral, uninvolved observer. Despite the often troubling content of the image, the pristine cinematography is often too beautiful to bear. Don Remata’s spotless white clothes and handkerchieves function in a similar manner – in their absurdity, they are reminders of the full and unavoidable intersubjectivity of being in the world.

Hard to Be a God might not be your cup of tea. That is your loss.