Lawrence O’Donnell is one of the many pseudonyms under which C.L. Moore and Henry Kuttner, both already established sf authors, published collaborative fiction after their 1940 marriage until Kuttner’s death in 1958. The extent and nature of their co-authorship in any individual story is never clear. ‘Vintage Season’ is generally considered to be ‘probably a full collaboration’, drawing out both author’s ‘concerns’ in a ‘perfect blend of Kuttner’s logic, Moore’s emotional depth, and their combined irony and stylistic sophistication’ (Attebery 175).

In the final days of a glorious May, Oliver Wilson, who owns a run-down mansion overlooking a small-town, faces a dilemma. Omerie, Kleph and Klia Sancisco have rented rooms until the end of the month, but his fiancée, Sue, wants him to accept a mysterious, lucrative offer to buy the house.

There is something peculiar about the Sansiscos: ‘the beautiful clothing they wore so confidently was not clothing they were accustomed to’ and they speak ‘as trained singers sing, with perfect breath control and voice placement’ (O’Donnell 264, 265). Their queerness – they are often described as effeminate, flamboyant and decadent – intrigues him; and others like them begin to appear in town. There is sadness in Kleph’s eyes when she looks at Oliver. She shows him marvels he does not quite comprehend, intoxicates him with euphoriac tea and seduces him. She is enraptured by a recording of an uncompleted three-dimensional, audio-visual symphonia about human suffering in the face of catastrophe, but it sickens Oliver ‘to the depths of his mind’ (286). He tricks her into revealing the truth: the tourists are time-travellers from an idyllic future, but there is more to their trip than merely visiting perfect seasons – they have come to watch a meteorite destroy the town.

Oliver wakes up several days later. The tourists have gone, replaced by Cenbe, who is observing the aftermath to help him complete his symphonia. He lets slip that the time-travellers were inoculated to prevent a virulent disease accidentally being taken back to their own time. Oliver, already infected by the meteorite-borne disease, leaves an account of all that he has learned so that time-travellers can be identified and thus future disasters averted. But his house is dynamited in ‘the futile attempt to halt the relentless spread of the Blue Death’ (306). Cenbe’s symphonia is a ‘crowning triumph’ (306).

David Twohy’s directorial debut, intended for theatrical release as The Grand Tour, was instead released to US cable as Disaster in Time and straight to video as Timescape (it is also sometimes called The Grand Tour: Disaster in Time). It rather effectively reworks ‘Vintage Season’ as a tightly budgeted Frank Capra picture channelled through Steven Spielberg, but maintains a sufficiently dark edge to keep it from falling into the kind of sentimentalism typical of cable movies that combine problematic family relationships with fantastical elements.

Widower Ben Wilson (Jeff Daniels) is converting a mansion into a guesthouse. He has a young teenage daughter, Hillary (Ariana Richards), a drink problem and recurring nightmares about the death of his wife Carolyn (Mimi Craven) in a car crash – he was seen fleeing the scene, but insists he was running for help. When the mysterious Madame Iovine (Marilyn Lightstone), a reworking of the pushy Hollia into Omerie’s role, arrives with half a dozen tourists, including the striking Reeve (Emilia Crow), as Kleph is renamed, Ben agrees to let them stay for a few days, despite the renovations being incomplete.

Whereas O’Donnell introduced the tourists’ strangeness by comparing them to foreigners and to people too wealthy to understand the ways of ordinary folk, Twohy depicts them as aloof, restricts their screen time, and reveals their unfamiliarity with everyday things through subtle touches, such as the bumbling Quish (David Wells) not understanding shoe laces. They claim to be from ‘south California’ and come across as European yuppies adrift in the American mid-west. Twohy also reduces the interaction between Ben and Reeve, sidestepping the demands that Kleph’s extravagant décor and advanced technology would have made on the budget; but his depiction of the initial attraction between them – Ben peers at the nearly-naked Reeve through the plastic sheeting over her doorway – looks like something from a straight-to-cable erotic thriller of the period. When Ben works out from Quish’s hints that the tourists are time-travelling ‘disaster groupies’ and moves to a hotel in town, Reeve seduces and intoxicates him to keep him from interfering in their plans.

Twohy focuses on Ben’s relationship with his daughter, and the bitterness of his dead wife’s father, Judge Caldwell (George Murdock), who obtains a writ of temporary custody over Hillary. When the meteor hits, destroying the west end of town, Ben’s concern is entirely for her. Once she is safe, he joins the search for survivors. The tourists – Quish insists he is not a sightseer but a ‘retropologist’ – are busy taking it all in. Next day, while Hillary helps out at the emergency centre established in the school, Ben discovers that the tourists have relocated to a new vantage point from which to observe a gas explosion destroying the school.

Ben wakes up to find a new time traveller, the Undersecretary (Robert Colbert), investigating Quish’s death while saving Ben from the explosion. Before leaving, an apologetic Reeve slips Quish’s passport, which contains a time-travelling device, to Ben. He travels back to before the meteor impact, but is caught trying to sneak Hillary out of the judge’s house. Nobody will listen to his warnings, and he has to phone his pre-disaster self to break him out of jail. Two minor plot points – the reverend’s (Time Winters) attempts to get Ben to mend the church bells, which have not rung for eighteen years, and repeated references to Für Elise, which Carolyn used to play – come together as the two Bens bash out Beethoven’s familiar bagatelle with sledgehammers on the bells. People pour in from the west end of town to find out what is going on, and are thus saved. Ben convinces them not to use the school as an emergency centre. The Undersecretary returns the time-travelling Ben to where he belongs.

In a brief coda, Ben looks at photos of Carolyn. Hillary finds his chair empty and Quish’s passport on the table beside it. From the next room comes the sound of Für Elise, played perfectly on the piano. ‘Mom?’, she asks. 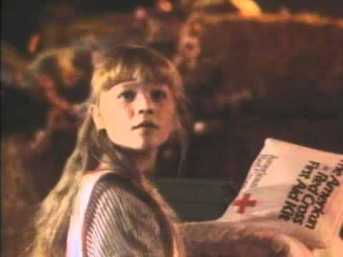 It is not uncommon to use a short story as a film’s opening act or sequence, deriving name recognition or kudos from the pre-sold property before finding ways to elaborate upon material that is too scanty to sustain an entire film. Timescape does not quite fit this pattern. Based on a substantial novella, which provides almost half of the film, it makes nothing of its source or authorship, which are probably too little known to be particularly marketable anyway. Twohy discards the O’Donnell’s selfish, bullying Sue, freeing Oliver to become less of a dupe as he is transformed – thanks to Jeff Daniels’ typically precise performance – into the loving and vulnerable Ben. While the film eschews O’Donnell’s sweetly detached, apocalyptic ironies, preferring to reassert the nuclear family and a safe domestic sphere, Twohy’s simple time-loop narrative results in a more persuasive vision of a man learning the error of his ways than the better-known Groundhog Day (Ramis 1993). The key scene comes after the prison breakout as the two Bens drive to the judge’s house to grab Hillary and flee the town. The pre-disaster Ben, on learning of the imminent catastrophes, accuses the post-disaster Ben of cowardice, just like when he – they – fled the car-crash rather than saving Carolyn. In this moment of heightened anxiety, Ben voices what he has known all along, and earns redemption by drawing on this self-knowledge to save others. It is not the kind of thing one finds in the fiction of Moore and Kuttner, individually or collaboratively, but in moving away from the substance and tone of their story, Twohy creates an affecting and genuinely science-fictional moment. It is unsurprising that his subsequent career as a writer and director of sf films has been pretty successful: while accommodating the demands of big-budget Hollywood filmmaking, he continues to display kinds of sf thinking more typically associated with the literary tradition.