There are three main parts to this week’s class: viewing and discussing Chelovek s kino-apparatom/Man with a Movie Camera (Vertov 1929); reading and discussing Tom Gunning’s ‘Cinema of Attraction[s]: Early Film, Its Spectator and the Avant-Garde’; and essay preparation for next week’s deadline.

In my experience, first year students often struggle with Man with a Movie Camera – very few ever seem to grasp it, let alone like it; and then by the time they are third years, and more used to engaging with a wide variety of films, a number of those who were initially quite negative about it come to appreciate it, even like it. So I did a bit more than I usually would to frame the film – especially as the day before on Cultural Value, Literature, Film and Consumption, they had gone from looking at versions of Sherlock Holmes and James Bond to reading Alain Robbe-Grillet’s Jealousy and watching Last Year at Marienbad (Resnais 1961).

Drawing on some work on film forms from an earlier week on colleague’s Film Style and Meaning module, I framed Man with a Movie Camera as both

and in relation to

We also had some questions to think about while watching the film:

I had to stay for the start of the screening to check something in the first few minutes of the film – and ended up watching the whole thing again for the second time in less than 48 hours. I love this movie more every time I see it.

The lecture began with some more framing of the film (next year, I need to try to get the lecture scheduled before the film, if possible).

Viva Paci describes the emergence of cinema as ‘part of the euphoria of modernity’. Like ‘other fetish phenomena typical of modernity, such as billboards, posters, expositions and store shelves’, cinema is ‘merchandise that makes itself visible, turning its presence into spectacle’ (126).Last week we saw, in Modern Times, the centrality of the department store to modern urban experience, and Man with a Movie Camera directly addresses some of these other phenomena. For example, in the early sequence of a sleeping woman slowly waking, there are  cut-aways to a detail from a poster, which later is revealed as the poster for a film called The Awakening (of a woman).

I outlined some of the ways in which many early actualité films shared the same drive as expositions and world’s fairs to expose mass audiences to new technologies and views/simulations of distant and exotic lands (and as this week is also thinking a little bit more about urban alienation and disorientation, it is not insignificant that the first known US serial killer, HH Holmes, stalked in and around the 1893 Chicago World’s Fair).

exoticism (as found in the era’s expositions and in the Paris arcades celebrated by Baudelaire and Benjamin), train journeys (and the new visions of the landscape in movement and the proliferation of perspectives they offered), advances in the faculty of sight (from the air, for example, or with microscopes) and the improvements to fantastic images [that] had already fed the collective imaginative identity extended [and] new aesthetic habits. (125)

Annoyingly, I could not find my copy of The World of Tomorrow (Bird and Johnson 1984) to show off some 1939 New York World’s Fair footage, so instead we focused on the connections to trains and new technologies of vision. An 1861 quote form Benjamin Gastineau best captures train travel as proleptic of watching a programme of short films such as the Lumière brothers first charged an audience to see at Le Salon Indien du Grand Café on 28 December 1895:

Devouring distance at the rate of fifteen leagues an hour, the steam engine, that powerful stage manager, throws the switches, changes the décor, and shifts the point of view every moment; in quick succession it presents the astonished traveller with happy scenes, sad scenes, burlesque interludes, brilliant fireworks, all visions that disappear as soon as they are seen. (Schivelbusch 63)

We spoke about Hale’s Tours (launched, of course, at an exposition – the 1904 St Louis Exhibition) and train films and, of course, Edison’s Railroad Smashup (1904), for which the film company bought two decommissioned trains and crashed them into each other. If we had way more time, I would also have shown the remarkable train crashes from Orlacs hände (Wiene 1924) and Spione (Lang 1928), the sequence shot from the front of the train in Bulldog Jack (Forde 1935) and the opening of La bête humaine (Renoir 1938) to show how this fascination continued on into narrative cinema, and is in some ways the visual precursor of the jump to lightspeed/hyperspace, etc. 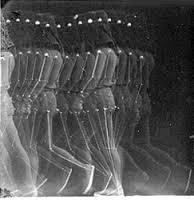 For new technologies of vision, we recalled some work from Film Style and Meaning on Eadweard Muybridge’s motion studies and Étienne-Jules Marey’s chronophotography – examples of pre-cinema which also lead to Frederick Taylor’s ‘scientific management’ of the workplace, suggested in both Modern Times and Man with a Movie Camera – and the similarities that can be found in such contemporaneous art as Marcel

Duchamp’s Nude Descending a Staircase, no.2 (1912). And, of course, we watched Cheese Mites (Duncan 1903) and Percy Smith’s The Birth of a Flower (1910) and his juggling fly films to see how microscopes and time-lapse photography could show human eyes things our eyes could otherwise not see. We looked at some views of Paris from the top of the Eiffel Tower in Paris qui dort (Clair 1925) – aerial views of a kind previously only accessible to people in aircraft and construction workers – and also at Onésime horloger (Durand 1908), in which the protagonist, frustrated that he cannot get his inheritance until he is older, speeds up the Paris city clock: a series of gags are played out, made funny by the accelerated pace of the action; and undercranked footage played back at regular speed sees pedestrians dash through the city, even more harried than usual by the regulation of life by clocks (which, of course, connects back to railroads, factories and other disciplinary institutions). .

We then turned to Soviet montage, and again I was able to connect back to some work on editing and montage from Film Style and Meaning. I began by introducing the key figures and their most important films:

A quick description of the Kuleshov effect gave me the excuse I’ve been looking for to show off the actorly range of lardy racist Steven Seagal, before

reminding students of Eisenstein’s theoretical discussion of montage and the analysis they had done of the clash of images in the sequence from Strike in which the assault on the workers is intercut with the slaughter of the bull in the abattoir. Plus, some lions.

We then finally discussed Man with a Movie Camera in some detail, picking out moments such as:

The final section of class was about Tom Gunning’s discussion of the cinema of attractions. Early film history used to be told in terms of a tension or conflict between two approaches to cinema that ultimately and somehow inevitably resulted in the dominance of narrative cinema. These tensions were rooted in a distinction between:

Auguste and Louis Lumière’s ‘realist’ actualité films (i.e., views of the real world or actuality footage), that mostly eschewed anything but the most minimal of narrative form; see Baby’s Breakfast (1895) or Arrival of a Train at La Ciotat (1895) or the non-Lumière Black Diamond Express and Electrocuting an Elephant (1903)

Georges Méliès fantastical féerie films (i.e., ‘trick films’ organised around special effects) that, because of the nature of many of his gags and routines, contain some more obvious narrative structuration; see The India Rubber Head (1901) or A Trip to the Moon (1902).

Tom Gunning and others have, over the last thirty years, argued against this view, finding that despite superficial differences both approaches to filmmaking shared something profoundly fundamental in common: a basic exhibitionist impulse to present an audience with ‘a series of views’ that are ‘fascinating because of their illusory power’. Reality/fantasy, actuality/staged, non-narrative/narrative are pretty much red herrings in the first decade of cinema.

We then spend some time working on this long passage to get a better sense of what Gunning means by cinema of attractions:

To summarize, the cinema of attractions directly solicits spectator attention, inciting visual curiosity, and supplying pleasure through an exciting spectacle – a unique event, whether fictional or documentary, that is of interest in itself. The attraction to be displayed may also be of a cinematic nature, such as the early close-ups just described, or trick films in which a cinematic manipulation (slow motion, reverse motion, substitution, multiple exposure) provides the film’s novelty. Fictional situations tend to be restricted to gags, vaudeville numbers or recreations of shocking or curious incidents (executions, current events). It is the direct address of the audience, in which an attraction is offered to the spectator by a cinema showman, that defines this approach to filmmaking. Theatrical display dominates over narrative absorption, emphasizing the direct stimulation of shock or surprise at the expense of unfolding a story or creating a diegetic universe. The cinema of attractions expends little energy creating characters with psychological motivations or individual personality. Making use of both fictional and non-fictional attractions, its energy moves outward towards an acknowledged spectator rather than inward towards the character-based situations essential to classical narrative. … An attraction aggressively subjected the spectator to ‘sensual or psychological impact’. … a montage of such attractions, creat[es] a relation to the spectator entirely different from his absorption in ‘illusory depictions’.

And then it was time to discuss the essay due next week.

Incidentally, 20% of the class really enjoyed Man with a Movie Camera, 20% liked specific parts of it, and 60% declined to comment

Recommended reading
Cities are often depicted as so alienating and disorienting that their denizens are driven to madness of various sorts, as in Fyodor Dostoevsky’s The Double (1926), Patrick Hamilton’s Hangover Square: A Tale of Darkest Earl’s Court (1941), Ralph Ellison’s Invisible Man (1952), Bret Easton Ellis’s American Psycho (1991) and Erik Larson’s non-fiction The Devil in the White City (2003).

Cities can also offer possibilities for freedom, as in Muriel Sparks’s The Girls of Slender Means (1963) and Patricia Highsmith’s The Price of Salt (1952), and for metamorphosis, as in chapters 6–7 of Stella Gibbons’s Cold Comfort Farm (1932) and chapter 11 of Agatha Christie’s The Moving Finger (1942), in which trips to London transform rural girls into a glamorous ladies.

Recommended viewing
Other city ‘symphony’ films include Manhatta (Sheeler and Strand 1921), Berlin: Symphony of a Great City (Ruttman 1927), Moscow (Kaufman 1927), A Bronx Morning (Leyda 1931) and City of Contrasts (Browning 1931). Some film poems, such as The Bridge (Ivens 1928), La Tour (Clair 1928), Every Day (Richter 1929), Rain (Ivens 1929) and Daybreak Express (Pennebaker 1953), are clearly related, as are such contemporary films as London Orbital (Petit and Sinclair 2002), Finisterre (Evans and Kelly 2003) and What Have You Done Today Mervyn Day? (Evans 2005).
People on Sunday (Siodmak and Ulmer 1930) combines a city symphony with a narrative about a group of young people played by non-professional actors.
Films of urban transformation include Theodora Goes Wild (Boleslawski 1936), Vertigo (Hitchcock 1958), The Apartment (Wilder 1960) and Better than Chocolate (Wheeler 1999).
Films of urban derangement include The Testament of Dr Mabuse (Lang 1933), Repulsion (Polanksi 1965), Taxi Driver (Scorsese 1976) and American Psycho (Harron 2000).
Urban transformation and derangement come together in disturbing ways in Videodrome (Cronenberg 1983), Tetsuo: The Iron Man (Tsukamoto 1989), Tokyo Fist (Tsukamoto 1995), Mulholland Drive (Lynch 2001) and A Snake of June (Tsukamoto 2002).