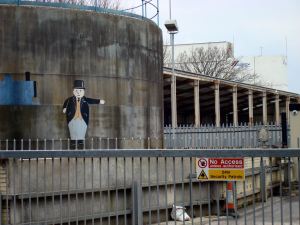 The privatisation of public utilities and services in Britain has been a disaster for everyone apart from those given carte blanche to loot the public purse. Oligopolistic consolidation. Unemployment annd precarity. Taxes paid more or less directly to shareholders as dividends. The undermining of democracy. The ‘greed is good’ excesses of the 1980s, the TINA lies of the 1990s, the austerity bullshit of the new millennium. The preening arrogance of the corporate elites and their political lackeys. No scandal seems to have the power to even shock any more, let alone lead to criminal investigation or – can you still even imagine? – jail time.

In Bristol, evidence has been found of the most profound malfeasance, the crossing of a boundary that we can all surely agree is a step too far.

The cloning of Thomas the Tank Engine. 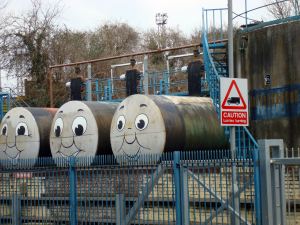 Is there not something sinister in their fixed grins that speaks of our age?

The mandated performance of individuality.

Behold the Abyss staring back.

We travelled over the mountains from Miami, and down to Florence. Perhaps it was the landscape we passed through to get there that made it seem in contrast so very very flat.

It is another Arizona town struggling to find a history.

Unlike Miami, its main street is now an historic downtown and, unlike Miami, it is, well, not so much pristine as shabby genteel. Scrubbed up nicely. Stripped of any sense of the passage of time. As if it was made this way and will stay this way.

Scattered over a handful of blocks are plaques. They are mostly about individual houses, recording maybe a century’s worth of possession, mostly English names but some Spanish, and how each owner in turn added bits, demolished bits, concealed bits. The five-room museum, in the former jail-turned-courthouse-turned-hospital-turned-goodness-knows-what over the years is far too spacious.

It’s as if nothing ever happened here.

Even in the afternoon sun, it feels a bit Twilight Zone.

Last year, Nerdwallet listed Florence as the number one ‘city on the rise’ in Arizona. But is difficult to imagine such an untethered-feeling place having a future. To picture it launching itself into the flow of history.

‘Nothing ever happens here’, would be a good motto. Especially if  followed by ‘move along, there’s nothing to see’.

The as-yet-unincarcerated population of Florence is around 25,500, but the economy hinges on the ‘corrections industry’, on the nine separate prisons in town, so there’s a good chance the locals are outnumbered by inmates.

Arizona’s death row and death house are here, too, have been for more than a century, and in World War 2 there was even a POW camp. German and Italian prisoners, mainly from north Africa. If they signed a document renouncing the Axis war effort, they were housed in ‘Democracy Town’, and permitted to leave the camp and work in the local cotton fields; those who did not sign were kept in the ‘Nazi Town’ area of the camp.

There’s an exhibit about it at the far end of the final room in the museum.

The exhibit does not mention that the southern half of Arizona was in Military Zone No. 1, which Japanese Americans were encouraged to leave ‘voluntarily’ in 1942, and in which they were then ordered to stay, placed under a curfew, while the dispossession and internment policies took shape.

The exhibit does not mention that to the north and west, in Mayer and Parker Dam, there were ‘Civilian Assembly Centers’, temporary camps where Japanese Americans were held after being removed from their homes. Or, in the same directions, the Gila River and Poston ‘Relocation Centers’, that is, internment camps. Or, further north, in Leupp, the Citizen Isolation Centre, reserved for ‘problem’ inmates. Or, to the south, the Catalina Federal Honor Camp, which held Japanese-American draft resisters and conscientious objectors.

Perhaps these omissions are fair enough. None of that happened in Florence itself. And besides, drawing attention to systematic, institutionalised racial injustice is probably not the done thing when you’re dependent on the prison-industrial complex. No matter how desperate you are for some history – any history – with which to fluff up your downtown.

Odd though that the exhibit does not mention the Japanese American civilians held in the POW camp alongside the captured Italian and German soldiers.

Note This is my second attempt to write up a light-hearted anecdote about Florence, but both times the opening line has led me in another direction. I will try again soon. Maybe tomorrow.

For another take on the town, try this – it is where I nicked my picture from cos I was too busy getting the ones I would need for that elusive light-hearted anecdote.

Zombies are to us as we are to what we could be.

Zombie narratives try to make us side with the worst of us against the most of us. (Accumulation by) dispossession shall be the whole of the law.

Zombies are the twenty-first century’s bomb-throwing anarchists, its beardy dirigibilists raining incendiary terror from the air. Destroy destroy destroy so a new world will rise from the ashes. But, as always, the destruction is welcomed by the architects of perpetual immiseration. Ultimately, the zombies work for them.

Zombies who struggle to retain or regain their humanity lack ambition. When zoe is all you are, why settle for the same old bios?

Zombies are metaphors, and zombie metaphors hang around long after they should have been shot in the head. Beat ’em or burn ’em, they go up pretty easy.

victim to the global recession was WASP, the World Aquanaut Security Patrol. Funding cuts saw it broken up into smaller national units, many of which were immediately disbanded. Marineville, that icon of postwar internationalism and sixties

design, was auctioned off to International Leisure, a division of Tracy International. It now combines a high-tech gated community with an exclusive resort. Its successful hosting of G7, G8 and G10 meetings, far from the media and even 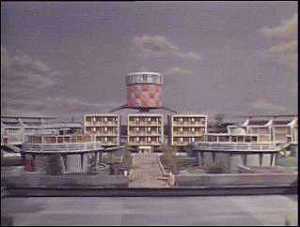 further from protestors, only enhanced its reputation among business elites. A retirement village for the super-rich is currently under construction.

ASP-UK, advised to expand its range of activities while right-sizing its operations, diversified into pollution monitoring, landfill management and recycling facilities. Around this time, mute amphibian beauty Marina became a

subject of interest to Immigration Services. Sans papier and facing internment, she quietly disappeared, apparently preferring to return to life beneath 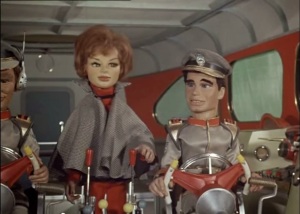 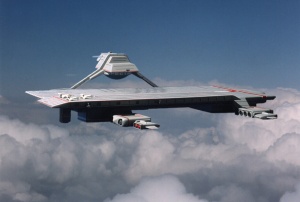 and the cost of retrofitting them to Cloudbase’s unique launch systems became just one more reason to scrap this ‘airborne monument to Keynesian folly and excess’. 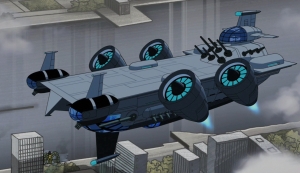 When irreconcilable differences in management styles saw attempts to share resources with SHIELD collapse, the fate of Spectrum was sealed. It slowly shrank to a clearing house for commissioning Private Military Contractors before formally disbanding.

Captain Scarlet, once the heroic face of this proud organisation, spent his final years as a Spectrum agent attending corporate events in a desperate bid to find alternative income streams. The extent of this desperation

only became apparent when footage of a five-thousand-dollar-a-plate event was leaked onto youtube, showing Scarlet being shot and killed – over and over again – by drunken executives at ten thousand dollars a bullet. You can see in his eyes that he knows it will never be enough.

In later years, Scarlet became the repeated victim of Joe McClaine, a stalker suffering from multiple personality disorder. As a child, Joe was the

subject of systematic abuse by his scientist father, apparently condoned – and certainly covered up – by his employers, the shadowy World Intelligence Network. During the course of his trial, Joe manifested as many as 90 different personalities. Ironically, Scarlet and his would-be killer are currently in separate wings of the same asylum.

One figure to ride out, and indeed profit from, the recession and era of austerity was billionairre Jeff

Tracy. His reputation, however, took quite a beating. Media outlets controlled by Tracy International depict him as a very private man, withdrawn and introspective. Critics, however, insist that he no longer dare show his face in public after the scandals that rocked International Rescue. Did the CIA really subcontract extraordinary

rendition abductions to International Rescue? Was Thunderbird 2 being used for human trafficking? What exactly happened to that refugee flotilla that sank without a survivor less than a mile from Tracy Island?

Jeff Tracy sporadically attempts to win back public support, philanthropically endangering the lives of his poorly-trained sons (and bystanders) by disregarding health and safety regulations in emergency situations. Courtesy of striking firefighters and ambulance crews, the once-lauded Tracy brothers are now commonly known as Scab Rescue.